Warning: Declaration of SlideshowErrorHandler::log_error($num, $str, $file, $line, $context = NULL) should be compatible with GalleryPlugin::log_error($error = NULL) in /home/elglo/public_html/businessamlive.com/wp-content/plugins/slideshow-gallery/includes/errorhandler.php on line 0
 Nigeria PIB: Group warns against reduction of communities’ equity to 2.5% – Businessamlive

The Centre for Human Rights and Anti-corruption Crusade (CHURAC) has described the 2.5 per cent equity voted for oil-producing community in the recently revised Petroleum Industry Bill (PIB) as an insult to the oil communities and a threat to peace in the Niger Delta region. 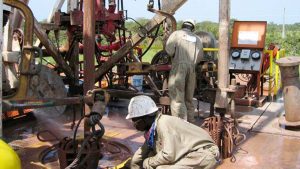 The not-for-profit organisation noted its discontentment in a statement by Cleric Alaowei, the national president.

Alaowei stated that when UmaruYar’Adua, erstwhile Nigerian president, granted amnesty to the former Niger Delta militancy group, 10 per cent equity share from the production sharing quota was voted for the oil-producing communities in line with the demands of the ‘freedom fighters’.

It was also noted that the initial reduction was met with little resistance as the communities were anxious to have the bill codified.

The group accused President Buhari of refusing to sign the bill into law during his first term in office, which it said is a sinister agenda targeted at removing the host communities’ share in the production sharing quota.

“We are again surprised that the revised executive bill sent to the national assembly by Buhari has reduced the host communities’ fund to 2.5 per cent. This is totally unacceptable to the oil-producing communities. These people suffered the environmental damage occasioned by the unlawful flaring of anthropogenic gas which has caused climate change in the Niger Delta region,” the statement read in part.

The 10 per cent fund in the proposed PIB, according to CHRAC, is the only survival means to rescue the impoverished communities from the economic contraction it is currently facing.

The group disclosed that anything short of the initial 10 per cent equity share is unacceptable to the Niger Delta people.

CHURAC also called on Timipre Sylva, the minister of state, petroleum resources, who it described as a victim of the economic onslaught, to desist from partnering with external forces bent on suppressing the people of the Niger Delta, stating that the initial PIB is a rightful possession of the people.

The Petroleum Industry Bill which was first presented to the national assembly in 2008 during the late UmaruYar’Adua administration is an omnibus law meant to regulate the entire sphere of the Nigerian oil and gas industry.