By Mike Ochonma & Onome Amuge
Confronted by an impending strike action involving the two in-house unions of Nigerian Railway Corporation (NRC), the management of the parastatal has directed railway district managers (RDMs), managers and coordinators, to shut down train services by midnight of Wednesday, November 17, 2021. 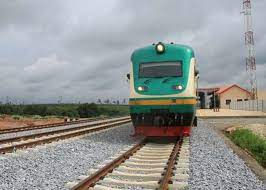 The NRC said it will suspend ticket sales to customers from Thursday, 18 November following the proposed industrial action by workers under the aegis of the Nigeria Union of Railway Workers (NUR) and Senior Staff Association (SSA) of the NRC over the management’s lack of provision of accommodation, non-payment of salaries and allowances and lack of commitment towards wellbeing of the workers.

A notice on the e-ticketing portal of the NRC read; “Dear Esteemed Passengers, Following the proposed labour action, NRC has temporarily suspended ticket purchase from Thursday 18th November 2021. Kindly bear with us as we anticipate expedited resolution. We look forward to welcoming you back to our service as soon as possible.”
A memo issued on Tuesday, November 16th, 2021,  by the managing director of NRC, Fidet Okhiria and obtained by Business AM, directed that all locomotives and coaches should be moved to a safe place.

The memo directs that all AKTS trains are to be returned to Idu. All WITS trains are to be returned to Agbor. For LITS, all Ibadan stock to its stable at Omi-Adion station, while Lagos stock to its stable at Mobolaji Johnson Station.
“All revenue collected should be banked by Wednesday, November 17, 2021, while revenue collected by the evening of Wednesday are to be secured appropriately. All RDMs, managers and coordinators should ensure that the running shed and workshop area are properly secured.
“The Commissioner of Police and Commandant of NSCDS, are to note the above and deploy their officers and men accordingly. This measure is to prevent unforeseen development like violence, vandalisation, stealing, wanton destruction of properties.”
The memo sent to the chairman of NRC board also disclosed that a crucial meeting with the representative of the unions was ongoing.
The Nigerian Railway workers are scheduled to embark on a 3-day warning strike from Thursday, November 18 to November 20, 2021.
A letter titled, “Notice and Directive to embark on 3-day warning strike nationwide’’ dated November 12th,  was addressed to the District Chairman/Secretary, Nigeria Union of Railway Workers and Senior Staff Association.
The workers in a letter jointly signed by  Innocent Ajiji, NUR president general; Aliyu Mainasara,  president, SSA, NRC branch; Segun Esan, secretary general, NUR, and Jibrin Kadiri, secretary, SSA, NRC branch, had warned that the workers would embark on an indefinite strike if their demands were not met after the warning strike.
Under the aegis of Nigeria Union of Railwaymen (NUR) and Senior Staff Association for the Statutory Corporation and Government-owned Company (SC GOC), the unions had given the Federal Government and the National Railway Corporation (NRC) a three-week ultimatum to address its welfare concerns to prevent a total industrial action across the country beginning from November 14.
These demands include an increase in the salaries of NRC staff, incorporation of life insurance and payment of promoted staff arrears from 2018 to date, among others.
According to the letter sent to the managing director of the NRC, Fidet Okhiria, and the minister of transportation, Rotimi Amaechi, the labour unions said their “agitation for enhanced salary cannot be overemphasized as it is an open secret that the salary regime of the Nigerian Railway workers is the worst and most incomprehensible of all salary structures available to the parastatals under the supervision of the federal ministry of transport.”
“The Honorable Minister of Transport once acceded to the fact that Nigerian Railway workers can easily be identified from the crowd by the way they look and dress, which he meant to be strikingly suggestive of the very poor salary paid in the corporation,” the letter read.
“It baffles us so much that the federal government spends billions of dollars on building rail transport infrastructure and transforming the system to a modern railway system but with no dint of impact or improvement in the welfare of the workers in terms of improved remuneration.
“We wonder how long the Honorable Minister of Transport will keep avoiding the railway workers and consciously failing in getting better pay for the impoverished Nigerian Railway workers. We wonder how long we will wait before we get our demand for improved salary approved just like that of National Identity Management Commission (NIMC) where workers’ salaries were recently upped by three  hundred percent?”
Business A.M gathered that a meeting between Rotimi Amaechi, the minister of transportation and the railway union workers held on Saturday, November14, ended in a deadlock as both parties failed to reach a conclusive agreement.
Businessamlive Website Stats