By Innocent Obasi
...as 4 oil mining blocks revert to NNPC

The agreement was signed by Umar Ajiya, chief financial officer of NNPCL, on behalf of the company, and Yonghong Chen, managing director of Addax Petroleum, at the NNPCL headquarters in Abuja.

With the signing of this agreement, Addax has ceased to be the Production Sharing Contract (PSC) contractor for the Oil Mining Leases (OML) 123/124 and OMLs 126 and 137.

Mele Kyari, Group CEO, NNPC Limited, said the Addax transfer would increase the production of crude oil from the assets, which would be advantageous to Nigeria. 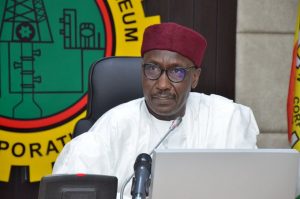 The history of the oil blocks goes back to 1973, when NNPC and Ashland Oil Inc. agreed to a PSC for the blocks. The agreement was terminated after 25 years.

In 1998, the state-owned company leased the four OMLs to Addax after it terminated its contract with Ashland.

In the same year, NNPC signed a PSC with Addax on the blocks and operated through Addax Petroleum for another 24 years.

The Nigerian oil sector regulator in April 2021 revoked the four OMLs due to the Addax’s inability to comply with targets. However, three weeks later, President Muhammadu Buhari gave back the blocks to Addax. Now Addax has willingly transferred the blocks back to NNPC.

Following the agreement with Addax, Kyari said NNPC has worked with all the regulatory agencies, the FIRS, the FCCPC, NUPRC and all other agencies of government to arrive at “what we have today”.

“We believe that we have delivered on the mandate given to us by the government to take over this asset and as expected. There have been ongoing engagements with the FIRS and this is in line with the approvals that we have,” Kyari said.

“From today, we expect the asset to take off immediately and we will restore production, ensure all governance requirements and as we proceed and also maintain the confidence of workers in this company in line with the commitment that we have, there will be no disruptions in the operations of this company,” he said.

Bala Wunti, head of NNPC’s subsidiary National Petroleum Investment Management Services, said this is the first time in the history of the hydrocarbon production journey that a PSC asset is being reverted to the concessionaire from a contractor.

“With the exit upon signing, we are going into a physical transition in which the asset operatorship will be transferred to us in a very prudent manner,” Wunti said.