Nigerian banks failed to make the cut of a sample list of Africa’s or emerging markets’ banks used by the International Monetary Fund (IMF) to carry out a Global Bank Stress Test (GST) for the purpose of assessing systemic risk in world banking.

The IMF said the stress test was conducted as part of its monitoring of global financial stability, as well as providing insight on the impact of the pandemic on banking systems around the world. It said it leveraged the conceptual framework of the “growth-at-risk” approach which it developed for the exercise.

The IMF did not provide any explanation as to why it did not choose any bank in Africa’s largest economy by gross domestic product (GDP) numbers, the continent’s most populous and the world’s largest concentration of black people.

But a new IMF ‘department paper’ explained that the global stress test covered 257 of the largest lenders from across 24 advanced economies (AEs) and five emerging markets (EMs) and that they together account for 70 percent of the world’s banking assets. “In each economy, the stress test covers as many institutions as necessary to account for at least 80 percent of assets for the individual banking systems.” Nigeria’s banking system did not form part of the test.

However, major banks in South Africa joined the sample list of the five emerging markets used for the report. Altogether, the sample consists of 53 banks in EMs and 204 banks in AEs.

Bank stress tests are conducted at a national level by central banks and supervisory authorities or by supra-national authorities for members of a currency union to assess the resilience of banks with the focus on risks to national banking systems, with less emphasis on global risks and resilience but assessing the potential impact of global shocks on banks around the world.

After a stress test conducted by the Central Bank of Nigeria (CBN) on 27 financial institutions in 2020, in the context of a sharp drop in oil prices resulting from the pandemic, reduced global demand for Nigeria’s oil products, a decline in government revenue, an unfavourable current-account position and a fall in real GDP, the apex bank noted that most banks were vulnerable to economic headwinds. Nevertheless, it said the banking industry’s solvency and liquidity position remains robust.

From the economic report for the 2020 half-year published, the apex bank stated then that a contraction in GDP in Q3 could lead to a fall in capital adequacy ratio (CAR) from an average of 15 percent to 11.2 percent and in a worst-case scenario, that a further contraction in GDP in Q4’2020 and Q1’2021, banks’ CAR could fall to as low as 8.3 percent.

It, however, concluded that the severity of the simulated contraction could be contained by a combination of fiscal and monetary interventions.

Moving on to the last Monetary Policy Committee (MPC) meeting held in March 2022, the committee pointed in good faith to the continued resilience of the banking system, evidenced by further moderation of the ratio of Non-Performing Loans (NPLs) to 4.84 percent in February 2022 from 4.90 percent in December 2021. It further stated that the banks remain resilient despite the international and domestic economic headwinds that could cause disruption to the local economy and the banking sector.

In its report contained in the communiqué, the apex bank said the Liquidity Ratio (LR) remained above its prudential limit at 43.5 percent in February 2022, while the Capital Adequacy Ratio (CAR) moderated slightly to 14.4 percent in February 2022 from 14.5 percent in December 2021. Generally, the policy committee expressed confidence in the CBN’s regulatory regime and commitment to maintaining stability in the banking system, urging the management to sustain its tight regulatory surveillance.

As for the IMF report, updates of the GST continue to point to relatively lower levels of resilience of banks in emerging market economies (EMs) than in advanced economies (AEs). 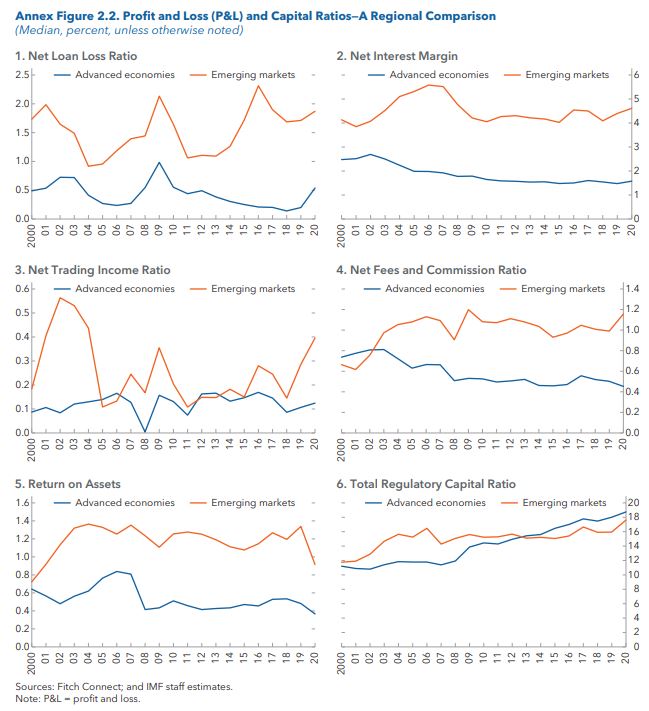 The IMF posited that the exercise found that banks in AEs raised bank capital (CET1) ratios by about 0.8 percentage points in 2020 and are generally resilient to continued pandemics shocks. However, stresses could be higher in EMs reflecting the fact that EM banks face larger downside macro-financial risks in an adverse scenario, have a higher sensitivity to shocks, and have built somewhat less capital during the peak of the pandemic in 2020.

According to the report, the IMF said, “Considering the significant uncertainty about the evolution of the global outlook, the exercise also presents the results of a severely adverse scenario, going further into the tail of the distribution of global macro-financial outcomes. Larger effects on bank capital would materialise in such a tail event, with a similar pattern of EMs being more exposed. These results paint an encouraging picture of resilience, but also a need for continued close monitoring, especially in EMs experiencing a more restrained macro-financial policy space in responding to further shocks.”

On a trajectory in 2022 and beyond, the Fund said, “In the adverse scenario, global GDP is about 5 percentage points and 2½ percentage points lower than in the baseline in 2022 and 2023, respectively. A sharper tightening in financial conditions for vulnerable businesses in emerging markets and developing economies results in a larger shock for EMs. In particular, the level of GDP in AEs is about 6.5 percentage points lower than in the baseline by 2024 in the adverse scenario, compared to a 9.4 percentage point in EMs. The larger GDP shock in EMs compared to AEs is also reflected in more severe shocks to unemployment, credit spreads, and stocks prices.