Nigerian Breweries Plc, has launched a new ultra-modern automated PET bottling line at the Ijebu Ode plant at the cost of N5.1 billion.

The PET bottling line, according to a statement by the brewing company, is designed with the latest technology that meets world-class safety and quality standards and is expected to produce 24,000 bottles per hour. 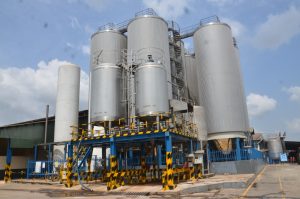 Speaking at the launching event, Kola Jamodu, the chairman, board of directors and executive committee, Nigeria Breweries, noted that the construction of the production line was conceived in order to deepen the availability of non-alcoholic product portfolio in the company and that the addition of the bottling line means that the company now has capacity to meet current demand of its customers.

On his part, Jordi Borrut Bel, chief executive officer, NB Plc, said that the new PET bottling line would ultimately become a central supply and a critical enabler to the company’s plans to export its rich portfolio of drinks outside Nigeria to West Africa and beyond.

He further stated that the company would continue to invest huge resources to expand its businesses and help create more job opportunities for Nigerians.

Governor Dapo Abiodun commended the company’s efforts in committing huge resources to the expansion of production lines in the factory.

He also noted the company’s possession of two major plants in Ijebu Ode and Ota makes it one of the largest taxpayers in the state, a major boost to the state’s Internally Generated Revenue (IGR).

The governor described the company’s investment as a welcome development for the people of Ogun state given the economic potentials involved. He expressed confidence that the investment would, no doubt, assist in enhancing economic prosperity not only for the community but Ogun state as a whole.

He equally commended Nigerian Breweries Plc for its generous support to the state particularly at the wake of the COVID-19 pandemic through the N50 million cash donation, provision of a vehicle, PPEs and non-alcoholic malt drinks to patients and health workers.

He further tasked the company to continue to partner with Ogun state on its journey to greatness in order to enhance prosperity both for the people and the state in general.

Niyi Adebayo, the minister of industry, trade & investment who was a special guest at the event, praised Nigerian Breweries on the achievement of its impressive project stating that the investment in a PET bottling line at this critical time has shown the company’s commitment to Nigeria and its industrialization drive.

“It is strong, reassuring evidence that fruitful opportunities exist in Nigeria’s economy for business growth and expansion, and that exploring these opportunities will add considerable value to the company and the Nigerian economy,” he said.

The minister further stated that the company has leveraged on its experience, technology and resources to deliver world class facilities to its plant, thus creating an enabling environment for businesses to thrive and prosper.

He added that the federal government is confident that the commissioning of the PET line will boost economic activities in Ogun State and further contribute to the increasing revenues from the non-oil sector of the GDP.