Global: With earnings seasons in full swing, investors across the globe were largely buy-side driven across North American and European markets, while markets in the Asian-Pacific region saw some sell-side action. Starting in Asia, the Hong Kong based Hang Seng Index was the worst performer as the index lost 2.20% w/w, while the China-based Shanghai composite and the Japanese Nikkei-225 eased 0.51% and 0.40% w/w respectively. Investors’ focus was largely on the latest economic numbers released this week; Japan’s unemployment data printed at 2.6% in June below analyst expectations, with retail sales data coming in lower than expected, although 1.5% higher in June. Meanwhile, in Europe, major markets closed higher today, as investors reacted favorably to earnings releases as well as the economic numbers coming out of the region.

The Italian stock market was the best performer w/w, as investors reacted to better-than-expected GDP figures for Q2’22; the Italian economy grew 1.0% in Q2’22 and was up 4.6% y/y, to pre-COVID levels.

Similarly in France, GDP grew 0.5% q/q, despite facing headwinds from rising inflation and LNG prices. Accordingly, the Italian MIB and the French CAC rose 5.60% w/w and 3.97% w/w respectively. Finally, in North America, investor focus has largely been on corporate earnings this week, as well as the interest rate decision from the U.S. Central Bank (FED). The FED decided to raise rates by 75bps as the central bank maintains its aggressive stance towards rising inflation. Meanwhile, a mix of underwhelming and better-than-expected earnings also drove market activity this week; Amazon and Apple both saw earnings rise to record levels surprising analyst expectations, while others like Intel and Meta saw earnings underperform analyst forecast. For the week, the Nasdaq Composite was the best performer in the region, rising 3.82% w/w, while the S&P 500 and the Dow Jones rose 3.78% and 2.41% respectively. 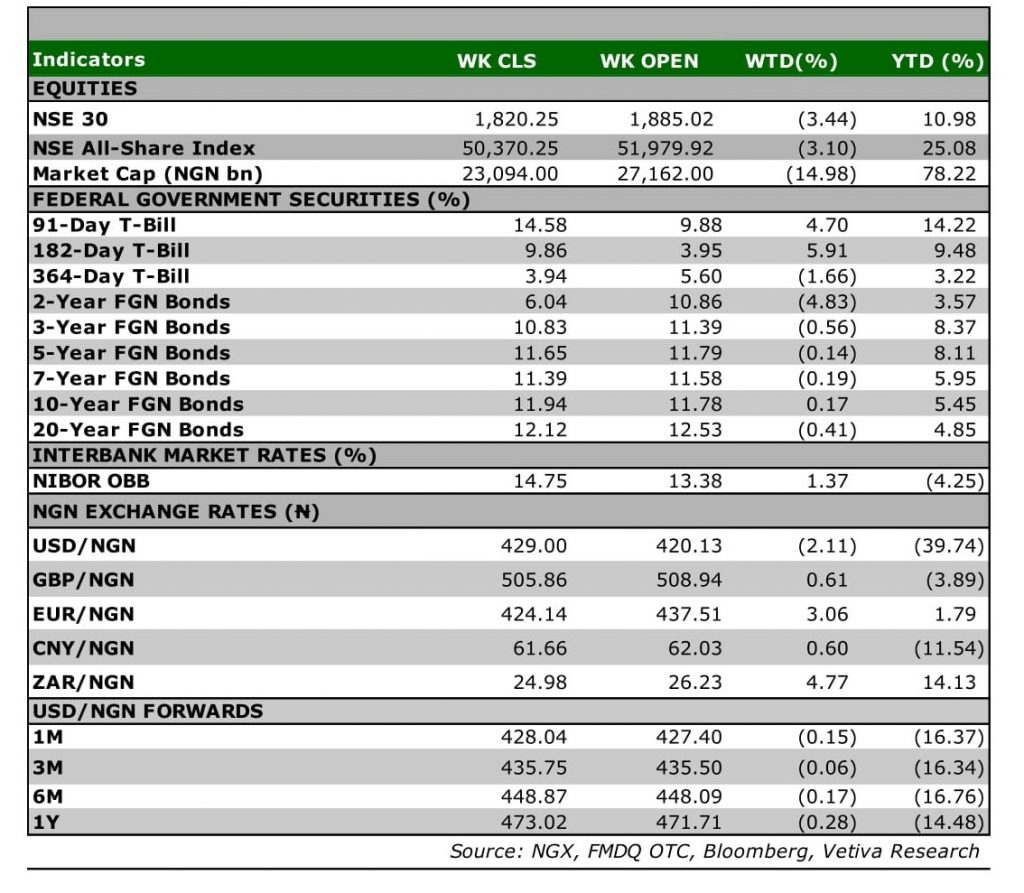 Domestic Economy: Nigeria’s FX crunch persists as a demand-supply mismatch sends the Naira to new all-time lows in both the official and parallel market. Amid the decline, the official-parallel gap has expanded to 65%, significantly above the 40% gap that warranted the apex bank’s intervention in 2017. While the Naira reels under pressure in the unofficial market, we attribute the recent volatility to heightened speculation. From a fundamental standpoint, we expect slight depreciation in the official window and a reversion to mean when speculation subsides in the parallel market.

Equities: Nigerian equities closed lower for a second consecutive week, as investors remain sell-side driven as higher rates in the fixed income space and FX constrains weigh on the equities market. The Consumer Goods sector was hit particularly hard this week, as it sunk 4.64% w/w, ending the week as the worst performer on the NGX. As inflation concerns mount, investors expect household spending to coming in weaker, and this has further dampened sentiment in the space; PZ, CADBURY, and HONYFLOUR all recorded double digit losses this week, while losses in NESTLE, UNILEVER, and FLOURMILL further dampened the sectors’ performance. Likewise, in the Banking space moderate losses in select names across the sector saw it fall 0.43% w/w, despite select names posting strong Q2’22 results. FBN Holdings released its Q2’22 results, where it showcased a 49% y/y increase in PAT, while revenue surged 23% y/y. Moving to the Industrial Goods space, investors were largely bearish in the likes of JBERGER and WAPCO despite both firms posting strong H1’22 performances. JBERGER recorded a 49% y/y surge in topline growth, while PAT came in 26% higher y/y. WAPCO saw topline growth climb 29% y/y, while PAT came in higher 32% y/y. Despite this both stocks sank 4.43% and 2.90% respectively, leading to a -0.22% fall in the sector. Finally, in the Oil and Gas space, losses in select fuel marketers saw the sector sink 0.95%.

Fixed Income: Investors in the FGN bonds and T-bills segment were largely sell-side driven this week, as they reacted to the latest NTB auction results. In the bonds space, investors were particularly bearish at the long-end of the market, as the March 2050 bond saw significant sell-side activity over the course of the week.

The yield on the tenor climbed 34bps w/w to settle at 13.49%, a sign that investors are concerned about the long-term health of the economy. Meanwhile, the latest NTB auction saw the CBN leave rates offered unchanged at 2.80%, 4.10%, and 7.00% respectively; as a result, yields across the NTB curve soared 74bps w/w. Finally, in the OMO space, yields soared 84bps on average, as investors digested and reacted to the NTB auction results.

Equity market: We saw investors take advantage of this week’s bearish run, as most stocks with beaten down prices recovered due to renewed buy interest. We anticipate a mixed start to the week, as investors re-access their positions given today’s positive turnaround.

Fixed Income: We expect the market to trade in a tepid manner to start off next week, as FGN bonds investors await the country’s Q2’22 GDP figures. Meanwhile, we expect to see a similar sentiment in the NTB market owing to the limited changes to the catalysts of activity in the space.

Despite the stronger pricing implemented across board during the year, NB’s volumes have continued to thrive on increased demand across sub-segments. We believe that a key factor in the company’s volume push is the successful take off of its Desperados brand, which has been supported by extensive marketing and distribution. Furthermore, we hold that the industry-wide premiumisation trend has proven beneficial to the company, especially in its Lager and Malt subsegments, which has also been supported by the increase in output capacity, specifically in the Malt segment. Evidently, the mix of sturdier industry pricing (Lager: +3% y/y, Malt: +4% y/y) and volumes resulted in a 32% y/y rise in the quarter’s Revenue to ₦134.0 billion.

This cemented the 30% y/y growth in Revenue witnessed in Q1, resulting in a half year topline figure of ₦274.1 billion (+31% y/y). However, a prime concern for topline sustainability, is the crushing effect of ever-rising inflation on consumer wallets. According to the NBS’ 2019 Consumption data report, consumers spend 0.37% of their total living expenses on alcoholic beverages. That said, this marginal portion is set to shrink further as consumers prioritize more pressing, more expensive food needs, which are beginning to demand a higher proportion of their incomes.

Margins have remained on track, faltering only on cost pressures

Still, amid rising inflationary pressures, gross margin has stayed afloat at 41% (Q2’21: 36%), although lower than the first quarter’s margin, notching H1’22 margin down 200bps to 43%. Similarly, operating margin has maintained the same path, coming in higher y/y at 9% and 13% in Q2 and H1 respectively, although lower than the Q1 figure (17%). The steep q/q decline in operating margin reflects the 52% jump in marketing and distribution, which management has focused on as a strategy to grow volumes. Nonetheless, EBIT came in 123% higher y/y at ₦12.1 billion for Q2’22 and 80% higher y/y at ₦35.8 billion for H1’22.

Although NB’s loans and borrowings has tripled to ₦82.0 billion year-to-date, finance expense declined 4% y/y for the H1 period. However, the company was heavily impacted by the volatilities in the FX market, recording FX losses of ₦7.3 billion (+51% y/y), which took net finance costs to ₦10.1 billion (+27% y/y) and underperformed our PBT expectation of ₦34.7 billion. Nevertheless, with the stronger y/y EBIT performance, PBT soared 1.2x to ₦25.7 billion. Interestingly, despite the PBT underperformance, NB recognized a tax credit of ₦194 million, which propped PAT in Q2’22 and supported a 143% y/y growth in PAT for H1’22 to ₦18.7 billion.

Whilst accounting for the earlier mentioned possible headwind to Revenue in the second half year, we remain bullish on the company’s strong brand presence in the market across beverage sub-segments. Furthermore, we recognize the intense push of its Star Radler variants, as well as the Desperados brand, as the company continually optimizes its route-to-market strategy. Additionally, although the premium brands and stronger pricing are expected to support margins in the second half of the year, we believe that the company’s strategy of largely local sourcing will ensure that costs rise at a slower pace than Revenue (as we have seen so far) and maintain margin stability. On Finance expense, we highlight the very real possibility of further FX losses, as the rate volatility at the parallel FX market continues. On top of that, the company’s increased debt burden could see net finance costs maintain its trajectory at +17% y/y to ₦20.8 billion for the full year.