By Samson Echenim
Nigeria’s leading carrier, Air Peace, has reiterated its commitment to the safety and comfort of its passengers, as it turns five. 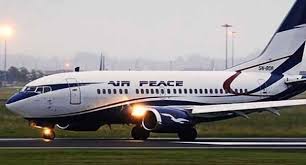 The airline celebrated its 5th anniversary by rewarding passengers with various gifts including free tickets, souvenirs and improved in-flight refreshments.
Allen Onyema, chairman and CEO, who described Air Peace, which is also West Africa’s largest carrier, as a multi-country airline, said it has been five years of steady progress.
“We are happy that Air Peace’s vision of creating seamless connections and network options for its domestic, regional and international markets, is being achieved. We are grateful to every stakeholder that has supported the us since inception and we  promise more improved air transport services,” Onyema said.
Also commenting, Oluwatoyin Olajide, chief operating officer, disclosed that the airline chose to celebrate with the flying public because it recognised that its customers are the reason for its existence.
“Our passengers are a key part of Air Peace’s success story, and must be celebrated. Air Peace has experienced a consistent rise to become an airline of global repute. The last five years have not been devoid of challenges, but such challenges have only made the airline a stronger brand not only in Nigeria but also in the international aviation industry,” she said.
She added: “From seven aircraft at launch, Air Peace now has 25 aircraft in its fleet, excluding the 10 brand new Boeing 737 MAX 8 and 30 Embraer 195-E2 aircraft it recently ordered. In five years, the airline has recorded a number of firsts in the aviation industry in Nigeria and West Africa. From seven aircraft and five routes at the launch of our operations on October 24, 2014 to 25 aircraft and 22 routes, our esteemed customers have consistently supported us and now, we can boast of being Nigeria’s and West Africa’s largest airline”.
Air Peace currently has over 3,000 Nigerians while the CEO keeps executing rare corporate philanthropy. Last month, the airline helped to evacuate over 600 Nigerians who were stranded in South Africa following an outbreak of the most recent of series of xenopphobic attacks against foreign citizens in the country.
Olajide said the airline keeps “doing a lot in unifying Nigeria through air transport,” adding that it has positively contributed to the economy of Nigeria, and those of her regional and international counterparts.
According to her, the airline could not have achieved all these feats without the consistent support of its valued customers.
She urged the flying public to continue to fly Air Peace, adding that the airline is committed to giving them best-in-class flight experience.
“We assure the flying public of better days ahead, as we also promise to continue improving our delivery of safe and comfortable flights,” she stated.