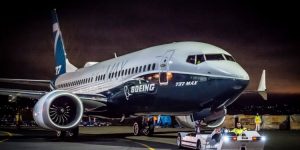 Nigeria’s aviation sphere is currently troubled as the country’s airspace management agency, NAMA and Max Air are on each other’s neck after the airline’s Boeing 747-400 loaded with 560 passengers and 16 crew returning from pilgrimage in Saudi Arabia landed on one of its engine side at the Minna Airport on Saturday.

The airline has reacted to the incident claiming that the Nigerian Airspace Management Agency’s (NAMA) Instrument Landing System at the airport was “epileptic with unreliable signals.”

But NAMA in a swift reaction said its ILS had no issues and was perfectly in order.

In a statement on Sunday, Ibrahim Dilli, Max Air’s director of operations, said “the aircraft engine slightly brushed the runway due to complex landing maneuvers accessioned by strong downdraft and an epileptic Instrument Landing System (ILS) at the Minna Airport.”

He said, “The Instrument Landing System at the airport was epileptic with unstable signals. Our pilots executed an approach using their wealth of experience and knowledge on the terrain and environment to a safe landing and stopped on the runway, during which one of the engines slightly brushed the runway due to complex landing maneuvers occasioned by the strong downdraft.”

However, NAMA in a statement on Sunday said its “Instrument Landing System was successfully calibrated early this year {2019} and there has been no report of non-alignment by the equipment from pilots since then.”

“Other operators that have used the facility after the incident have not complained about the ILS malfunctioning. NAMA has made available other alternative approaches like the Performance Based Navigation (PBN) approach procedures and Very High Omni-directional Radio Range/Distance Measuring Equipment (VOR/DME) approach procedures which are alternatives to the ILS,” the agency stated in a statement by Khalid Emele, general manager, public affairs.

Meanwhile, the Accident Investigation Bureau (AIB) has launched an investigation into the incident.

Akin Olateru, AIB’s commissioner, said the aircraft which took off from King Abdul –AZIZ International Airport, Jeddah, Saudi Arabia with 560 passengers and 16 crew members on board, on landing, screeped the runway, while the No 1 engine brushed the runway surface.

“As the investigation agency AIB needs and hereby solicit for your help .We want the public to know that we would be amenable to receiving any video clip, relevant information any members of the public may have of the serious incident that can assists us with this investigation,” he said.