The Central Bank of Nigeria (CBN) has announced its decision to withdraw and redesign the naira notes, specifically the N200, N500, and N1,000 paper currencies, effective from December 2022.

Godwin Emefiele, governor of the apex bank, made this known in a press statement, noting that the decision was taken in order to control the currency in circulation. 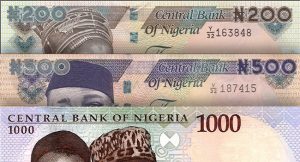 According to the CBN governor, the old notes would cease to be regarded as legal tender by January 31, 2023 following the federal government’s directive for the redesign and circulation of the new notes.

Emefiele bemoaned the hoarding of banknotes, noting that over 80 percent of the currency in circulation are outside the vaults of commercial banks. He also identified other challenges affecting currency management to include increasing ease and risk of counterfeiting and the worsening shortage of clean and fit banknotes. This, he explained, has resulted in negative perception of the CBN and increased risk to financial stability.

To this end, the CBN governor said that the redesigning of the naira notes would help to curb counterfeit notes, as well as hamper ransom payment to terrorists and kidnappers.

“On the basis of these trends, problems, and facts, and in line with Sections 19, Subsections a and b of the CBN Act 2007, the management of the CBN sought and obtained the approval of President Muhammadu Buhari to redesign, produce, and circulate new series of banknotes at N100, N200, N500, and N1,000 levels,” Emefiele said.

Accordingly, all Deposit Money Banks (DMBs) currently holding the existing denominations of the currency were directed to return the notes back to the CBN with immediate effect. The CBN also disclosed that newly designed currency will be released to the banks on first-come-first-serve basis.

The central bank enjoined bank customers to begin paying into their bank accounts the existing currency to enable them withdraw the new banknotes once circulation begins in mid-December 2022.

“All banks are therefore expected to keep open their currency processing centres from Monday to Saturday so as to accommodate all cash that will be returned by their customers,” the CBN stated.

It warned members of the public against rejecting the present notes as a means of exchange for purchase of goods and services as they remain legal tenders until January 2023. DMBs were also directed to waive charges for cash returned/paid into their accounts by customers.