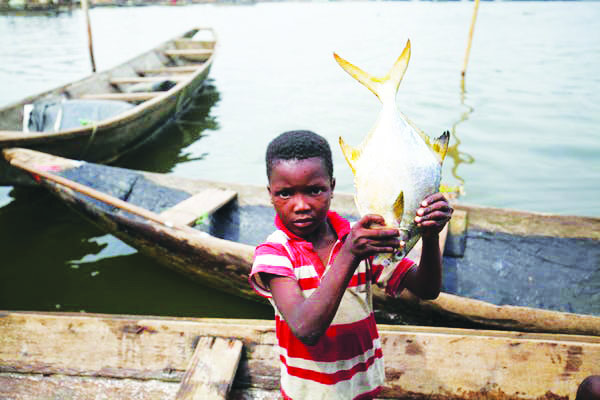 Graduate Teaching Assistant, King’s College London, King’s College London Sometime in the next year or two, Nigeria will become the seventh country to reach a population of 200m or more. It is still growing considerably faster than all other nations towards the top of the list and, by 2050, the UN expects Nigeria to have the world’s third-largest population.

Keeping all those mouths fed will be a huge challenge, not least because millions of Nigerians depend on fish from the Atlantic coastline, mostly caught by small-scale artisanal fishermen. And those livelihoods are now threatened by climate change, pollution and illegal fishing.

Firstly, climate change: as oceans warm, habitats will be degraded and biodiversity will be lost. Many fish will migrate towards the poles to follow the cooler seas, making fishing at high latitudes more productive while tropical fisheries suffer. Nigeria, just above the equator, will be hit particularly hard. According to the World Bank, under a high CO₂ emissions scenario there will be a 53% reduction in the country’s fish resources by 2050.

Nigeria did adopt a climate change strategy as part of the UN policy process which culminated in the Paris Agreement, but it does not seem to have been widely implemented. Neither is there any evidence of an adaptation policy that would enable vulnerable coastal communities to become more resilient in the face of climate change.

Second, pollution by oil companies also threatens the livelihood of more than 6.5m people in the Niger Delta area. The 2011 Bonga oilfield spillage, a facility owned by Shell Nigeria, is just one recent example of the inadequacies of existing environmental regulations. The spill discharged an estimated 40,000 barrels of crude oil that then spread along the Atlantic coast for 185 km. Nearly 30,000 fishermen were forced to abandon their trade.

According to the Niger Delta Artisanal Fisher Association, not only have communities not been compensated, they have also been hit by reduced populations of bonga fish, a common species in the area.

As a relatively poor country with relatively rich seas, Nigeria is also vulnerable to illegal fishing by foreign vessels, predominantly from China. No wonder: the government’s fisheries department does not have any patrol boats to monitor licensed vessels and, when I interviewed a representative from the department, they claimed there has been no budgetary allocation for “monitoring, control and surveillance” in more than 15 years. In March 2018, the Nigerian navy noted that the country loses an estimated US$70 million each year due to illegal fishing.

These three threats add up to looming disaster: according to an ODI report, half of the fish species in waters off West Africa are already overexploited.

With fewer fish to catch, people who depend on the oceans for their livelihoods are seeking more creative ways to make ends meet. This has included fishing across borders, which has the potential to provoke conflict between Nigeria and its neighbours – in one 2017 incident, Cameroonian forces are alleged to have killed 97 Nigerians who they claimed had not paid a fishing levy.

With no clear climate change mitigation and adaptation strategy, weak fisheries and environmental management policies, there is growing potential for unrest. Coastal communities are attempting to build their resilience without institutional support, yet may undermine the stability of Nigeria and neighbouring countries.

To see that depleting fisheries have the potential to undermine the limited stability currently enjoyed in the country, one only has to look as far as north-central Nigeria. There, a conflict between nomadic pastoralists and resident farmers due to lack of land for grazing has resulted in more than 1,000 deaths, and the displacement of millions of people.

To avoid a similar resource conflict along its coasts, Nigeria needs a national plan of action for how to help people who are left vulnerable by its depleting fisheries. This would first require robust monitoring and control mechanisms to cut out illegal fishing and ensure the country’s remaining resources are exploited sustainably. Environmental agencies also need to be better equipped to enforce existing regulations, including ensuring that oil companies clean up their spillages to the level that is seen in developed countries.

Finally, having a nicely written climate change mitigation policy is great, but its time for Nigeria to walk the walk. It must invest in climate adaptation strategies that would empower coastal communities and better prepare them to cope with the impact of depleting fisheries.

N111bn off market cap as sell pressure persists on Nigeria equities market with index down 0.88%