The Nigerian Maritime Administration and Safety Agency (NIMASA) says ship whose 19 crew were kidnapped near Bonny in Rivers State on Tuesday failed to establish contact with Nigerian authorities despite working in the country’s waters for 10 days before her crew were taken hostage by pirates. 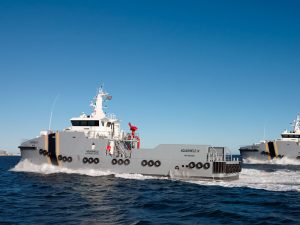 Nave Constellation, a tanker vessel was moving crude oil when she was attacked by the pirates who abducted 11 Indian and one Turkish crews off the vessel.

Dakuku Peterside, director general of NIMASA said on Thursday in Abuja that the ship contacted his agency and the Nigerian Navy only after she became distressed.

This revelation confirms reports of vessels working in Nigerian waters without observing the country’s Cabotage laws and paying statutory dues and fees. The situation is a strong indication that the apex maritime regulator, NIMASA has severe loopholes in its operations.

The NIMASA boss however hinted that the agency and the navy had swung into action to secure freedom of the kidnapped crew.

Dakuku also spoke about NIMASA’s readiness to fast-track the maritime security architecture, adding that the agency was working with relevant partners to ensure the crew onboard were secured and safe.

Dakuku who spoke in Abuja on the sidelines of the ongoing National Transportation Summit organised by the Chartered Institute of Transport Administration of Nigeria (CIoTA), stated that the tanker was attacked off the coast of Bonny with 19 persons alleged to have been picked up leaving nine crew members onboard the vessel.

He said, “The operators of the vessel made contact with NIMASA and the Nigerian Navy and we immediately went to work.

“However, that isn’t an issue because life is more precious than any other consideration. We have also immediately contacted the naval unit around that area and they have gone to work. The Navy has established contact with the remaining crew members onboard the vessel and the nine persons onboard the vessel are safe and the vessel is safe.”

The DG who lamented that this was happening at a time that efforts were being put together to make Nigerian waterways safe gave the assurance that the agency would not rest on its oars. “I think this would ultimately serve as catalyst for us to fast-track what we are doing to safeguard our waterways so that commerce can thrive again and people can do economic activities without fear or hindrance, ” he said.

While sympathising with the victims and their families for the ordeal and challenges of being kidnapped, he urged every concerned citizen and stakeholders to come together and work with NIMASA and relevant security Agencies to end the menace.

It may be recalled that Nigeria recently hosted a Global Maritime Security Conference (GMSC) where several engagement with stakeholders from all over the world, on the global maritime scale towards enhancing collaboration among maritime nations in order to find lasting solution to the security issues on the Gulf of Guinea and on the entire West and Central Africa.