By Dikachi Franklin, in Owerri
Hope of getting the required medical attention is building up for patients who were abandoned  in Imo State public hospitals and other health institutions for the past two months by the striking medical doctors. 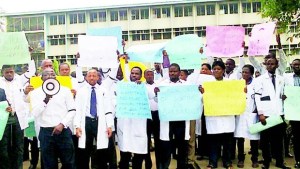 In a meeting held by the enlarged council of the Nigerian Medical Association (NMA)  Imo State branch with Governor Emeka Ihedioha at the Sam Mbakwe Executive Council Chambers, government house, Owerri, the NMA Imo State branch agreed to suspend its two months industrial action embarked upon to press home their demands.
Kyrian Duruewuru, chairman of Imo State branch of NMA tabled their demands which include non-implementation of the Revised Consolidated Medical Salary Scale (CONMESS) of January 2014, reduction of salaries of doctors in Imo State service by 30 percent, payment of their outstanding arrears of 30 percent reduction of salaries and payment of the three months arrears of Imo State University Teaching Hospital doctors.
Duruewuru also  informed the governor of the outstanding payment of 10 months arrears of allowances for doctors in the Hospitals Management Board (HMB) and the Imo State Specialist Hospital (ISSH); payment of promotion arrears, deplorable condition of all access roads to  Imo State University Teaching Hospital (IMSUTH), loss of accreditation of many departments in IMSUTH for both undergraduate and postgraduate studies as well as the restoration of full subvention to IMSUTH, ISSH and HMB .
Responding, governor Ihedioha said “you have been on strike for over one month and many patients may have died as a result of negligence. The Bible tells us not to kill knowingly or unknowingly. I have heard all you said”.
The governor said further:  “On the issue of full subvention to the teaching hospital, Imo Specialist Hospital and hospitals management board, we can do that immediately. On the issue of collapsed access roads to the Imo State University Teaching Hospital, we shall do so as soon as possible”.
But on the issue  of accreditation of some departments in the teaching hospital, the governor said that government would collaborate with NMA Imo  branch, adding “we need to know what needs to be done and how it should be done, ” he said.