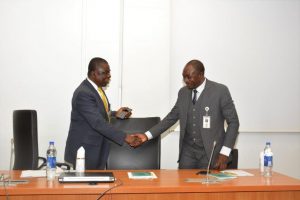 Nigerian National Petroleum Corporation (NNPC), the country’s state-owned oil company, appears to have adopted a proactive strategy in the management of information it emerged from the corporation’s quarterly meeting of its public affairs officers in Abuja, Wednesday.

The strategy, according to a statement by the corporation, is being driven by a need to reposition NNPC as a global company of excellence.

As a result, public affairs officers (PAOs) of the corporation have been
trained on the need to adopt proactive and predictive public relations
strategies in their management of information emanating from the
nation’s oil and gas industry, a major part of the national economy, said the corporation.

Ndu Ughamadu, group general manager, group public affairs division,
speaking at this first Quarterly Interactive Session (GQIS), described
the petroleum sector as the heartbeat of the economy and implored participants to be dutiful and with sincerity of purpose address concerns of all stakeholders.

He described the GQIS as a knowledge sharing gathering that would enable
PAOs to discharge their duties efficiently in alignment with the NNPC’s
management agenda of transparency, accountability and performance excellence (TAPE).

He stated that the session was also geared towards repositioning the
image of the NNPC for the better, urging the participants to be passionate, courageous and professional in the discharge of their mandates.

Ughamadu implored participants to efficiently negotiate and manage the
expectations of internal and external stakeholders, emphasizing the need
for them to collaborate and cooperate with one another to boost the
reputation of the NNPC in positive light.

Abdullahi Idris, executive director, services, Kaduna Refining and
Petrochemical Company (KRPC), who was the guest speaker at the event,
said that public affairs function was a strategic management function
key to the resolution of crisis emanating from the various publics of
the NNPC.

He noted that PAOs were solution providers that must at all times employ
proactive and predictive PR strategies and not reactionary strategy,
adding that their ability to dominate their environment would enable them function effectively in their various strategic business units (SBUs).

Idris who spoke on the topic: Managing Information in the Oil and Gas
Industry, stated that PAOs must imbibe the virtues of being confident,
courageous and passionate about their onerous duties of promoting the
image of the corporation.

The statement explained that participants were drawn from the various
subsidiaries and relevant units of the corporation.