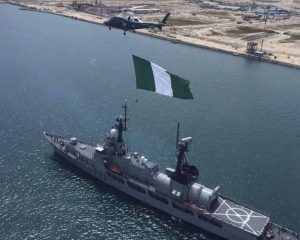 Okunbo told the Nigerian Senate that his company started providing maritime security services for relevant agencies and businesses operating on the country’s water since 2007.

The OMS boss described as unacceptable, the attempt by NPA to dismantle a security zone on the Atlantic Ocean, near Lagos known as Secured Anchorage Area (SAA) where OMS has been enabling the Nigerian Navy through a partnership contract to provide security for international shipping lines calling at Lagos ports.

Recall that the NPA had said it was going to dismantle the SAA, after it alleged that the service was raising cost of shipping at the country’s ports.

On the contrary, OMS had said its partnership with the navy on the SAA had helped multinational shipping lines reduced risks of hijacking and kidnapping for randsom, maintain that this leads to reduction in cost of shipping as the shipping lines face minimal risk as they approach the ports.

Okunbo told the Senate Joint Committee on Navy and Marine Transport on Wednesday that with his contribution to the development of Nigeria and with the resources put in, getting to know of NPA’s decision on the pages of newspapers, was  very insultive.

He maintained that that OMSL is an accredited and highly respected Nigerian maritime security solutions provider that operates legally and operating in line with the law of the land.

According to him, OMSL has operations centres at key strategic locations in Port Harcourt, Warri and Lagos and its activities are not and will never be threat to the country’s security, adding that what it does is of the overall interest of Nigeria and Nigerians.

Okunbo who took a swipe at the NPA for denigrating him and destroying his hard earned integrity, said, “OMSL  started in 2007 at the height of militancy where this country would have been producing less than 300barrels per day. Admiral Augustus Aikhomu late who was the first chairman of OMS and also who has been the chief of Naval Staff was the one that came up with this idea.

“At this time it was just an intervention and we wrote to the Navy In 2007, we bought only three vessels, we started this business with only three vessels because it was pertinent to open mistras which was short in 70,000 per day. There were bullet holes on shells EA field. Adax was attacked on daily bases and shell was going to close the whole of their eastern production.”