Nigeria’s indigenous energy group listed on both the Nigerian and Johannesburg Stock Exchange, Oando Plc has grown its year-to-date profit after tax (PAT) N13.1 billion as at September, 26 per cent higher than N10.4 billion posted in the same period in 2018. 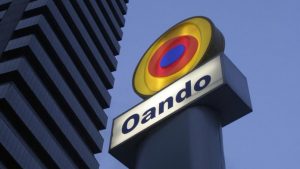 Its unaudited account financial report of the nine months operations ended September also shows eight per cent increase in its production which rose to 43,045boe/day within period as against 40,039boe/day in the previous day.

However, the energy group experienced decrease in its turnover between January and September this year which stood at N413.8 billion, 18 per cent lower than N505.1 billion in the comparative period of 2018.

The report also shows that it moderation in the debt profile of the company as total group borrowing shrank by eight per cent from N210.9 billion in 2018 to N193.1 billion in 2019.

Commenting on the results, Wale Tinubu, Group Chief Executive of Oando said in the period under review, the Group made substantial progress on its top priority of operational growth and recorded an eight per cent increase in hydrocarbon production.

He said: “In conjunction with our partners, we successfully completed an ambitious 6-well drilling program, the results of which have been positive, and are particularly excited about the discovery of a significant gas and condensate find at a field in OML 61 of our Joint Venture.”

He stressed that this had had a major impact on Oando’s reserves and consequently future cash flows.

Tinubu added that production has since commenced in October on the completed wells, and the gas will largely be channeled to feed the nation’s power sector through the company’s Joint Venture’s Okpai Power plant, acknowledged as Nigeria’s first independent power plant.

“In addition, we achieved an 8 per cent reduction in our debt levels, whilst growing free cash flows. Over the last quarter of the year, our focus will be on the completion of our drilling program as well as “tie-in” of the new discoveries,” he said.