Governor Ben Ayade, a professor of micro-biology, has roughly 36 months to the termination of his final term as chief executive of Cross River, a littoral state with estimated $12.3 billion gross domestic product (GDP). With less than three years to leave office, Ayade, after a week’s stay at Obudu Ranch Resort and its 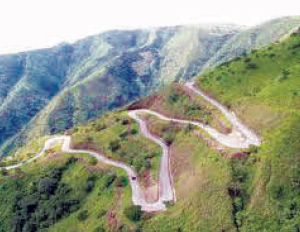 surrounding Becheve aborigines, says he is getting ready to carry out massive renovation work to revamp the top tourist attraction atop the Obudu Mountain range. With investments by the state put at over N10 billion as at 2007, the resort generated about N20.66 million annually to the home government, while other tourist sites in the state, topped by the effervescent Calabar Carnival, provided over N2 billion each year.

However, the alluring hilltop resort has been left largely unattended to for much of Ayade’s administration. Activities like the Obudu Mountain Race that held around October and November was stopped by his administration. The Race, with prize money of $50,000 at the time was the world’s top money-paying mountain challenge.

But coming only in the twilight of his administration, the seemingly fleeting rehabilitation project by Ayade is “coming too little, too late,” said a communication analyst, who had lived in Calabar for 12 years, toured all its tourist sites, and has been visiting the state several times yearly.

Obudu Resort’s peak visitor periods were January to April, and October to December each year, according to a study published in 2017 in the Journal of Hospitality and Management Tourism. Another study said visitors increased from 53,634 in 2007/8 to 63,974 in 2009/10, showing a 19 percent increase. In 2010, revenue figures showed that banks yielded N36.73 million or 45 percent to Cross River’s internally generated revenue (IGR), while hotels paid N2.10 million or 15 percent as tax. Meanwhile the Carnival Calabar generated N2 billion in 2008. Subsequently, the yearly December-end street party has been grossing more income for the state.

M. McCaughley, a British adventurer and veterinarian first discovered Obudu Mountain in 1949. He returned in 1951 with Major Cranfield and Hugh Jones, a rancher, to explore the captivating and enchanting snow-capped rolling hills. The colonialists established a cattle ranch atop the hill, having observed its climate resembled theirs in Scotland.

Obudu Ranch Resort began gaining wider international recognition and patronage during the Donald Duke administration  of 1999–2007, with his remodelling of the ranch’s old buildings, structures and facilities, topped with construction of an International Convention Centre, a Presidential lodge, honey factory, water park, gym facilities and tennis courts, upgrading of the Becheve Nature reserve park, the Utanga Safari lodges, top-class Ranch Hotel, and a 15-km cable car, and the Obudu Ranch Resort International Mountain Race, all to create awareness and attract high level patronage globally. Lodging rooms in Obudu Ranch Resort comprise of chalets, standard rooms, executive rooms, huts and the presidential suites. Several top-rated conferences have been holding at the resort until recent years. In late 2010, former president, Goodluck Jonathan, via his retreat formatted the Presidential Hill, a presidential retreat at the topmost point, built in the mould of US Camp David, the official retreat centre of the US president, lying in a heavily wooded area of Catoctin Mountain in Maryland; about 113 kilometres from Washington D.C.

Undoubtedly, Obudu Ranch Resort witnessed its record infrastructure provision and development with over N10 billion in investments by the Donald Duke administration. Initial funding came from a N4.6 billion bond sourced from the Nigerian capital market. The state government was able to carry out a complete turnaround of facilities at the holiday resort. The chalets were increased to about 80; an airstrip at Bebi, about 40 kilometres to the hilltop, with runway extended to 2.5 kilometres; a golf course provided; a water park constructed at the foothill. The Presidential Retreat is spruced with an international conference centre, which covers an area of 134 square kilometres on an elevation of 1,576-metres. It is the highest point of Obudu Ranch Resort. Erstwhile governor Duke re-designed the resort with beautiful bricks and prefabricated houses, and a network of breath-taking roads. There is no end in sight to making the ranch the best tourist site in Nigeria; as it is not in want of space for expansion.

Sadly, since 2015 till date, the Ranch’s glories have faded. Its few years of formal establishment as a tourist centre had receded in importance. Its hitherto high visitors/tourists traffic has reduced to just few. The enchanting chalets, golf course, horse ride, presidential hill, international convention centre, cable car, airport, among others, have become dilapidated, due mainly to lack of renovation and neglect by the Ayade government. Today, the beautiful Obudu Ranch Resort has sadly been reduced to a mere site for breeding and production of few cattle. All of the honey centre, dairy farm, and others, have gone.

Meanwhile, Governor Ayade is also talking of building social housing for the Obudu Ranch natives, the Becheve aborigines who are the native owners of the resort area. He said, over the years, the natives have received very abysmal attention and treatment from government, in terms of economic development, empowerment and modern social infrastructures till date.  While it is true that the development of the resort by government has to an extent benefited the aborigines in one way or the other, it does not, however, transform their immediate surrounding and environment. Neither has their economic power been greatly boosted as a people living side by side the Obudu Ranch Resort, which is their God-given ancestral home, Ayade noted.

He said it is based on this premise that he is moving ahead to build a befitting Social Housing Estate with all the modern facilities. He said he is bothered by the fusty and deplorable conditions under which the aborigines and other citizens who reside among them have found themselves, beside a reputable resort as Obudu Ranch.

“It is not a positive [thing] that the aborigines are reduced and relegated to the worst form of human existence, barely surviving under what can be best described as sub-human living conditions that is compounded by teeth-rattling chilling cold occasioned by extreme temperature at the ranch. To change the present ugly narrative of the aborigines is my responsibility, a duty I will execute as soon as possible,” the governor said.

“I decided to take a guided tour to spend one week with the people to feel their pulse as we prepare to make the Ranch the most attractive centre for visits in Nigeria. I want to see how the citizens, the aborigines, have been living side by side with the glaring reality of the luxury of the ranch resort. We are here at the Ranch, and when you look to the left and right, what you see in the entire place are the aborigines, the original owners of Obudu Cattle Ranch,” he said.

According to him, the uplifting of the aborigines’ status would be combined with a “comprehensive renovation and revamping of the prime tourism resort, including going into commercial farming and industrial tourism in the ranch, where potatoes and rare ornamented flowers will be commercially cultivated and exported through his touted Obudu International Cargo Airport. But Bebi, a clearly approved airport with standard runway already exists at Obudu foothill, built to service the entire resort and adjoining Obudu town.

Ayade says the development architecture to transform the standard of the Obudu aborigines and strangers residing with them, would be cited as his real performance index; measured by how many persons he was able to free from the claws of poverty; and not by how many super highways, industries and deep seaport he built.

“For us as a state,… my performance efficiency should be measured by how much I have lifted people from extreme poverty to comfort; not by how many culverts, how many bridges, how many superhighways, how many deep seaports I have built. The real growth is human growth; and that is why I do not believe in Gross Domestic Products (GDP). I believe in human happiness index. I want to be assessed on the basis of how happy these people are with the onset of me being governor. When I leave office, what will be the difference I have made in their lives? Until I make such a difference, I would have failed as governor,” he said.

However, evidences abound that Ayade has his hands on every pie, but with clearly little capacity to make a grab. Little time is left before he leaves the state as chief executive.

He had variously spoken of building a 275-km superhighway at the cost of N700 billion with the project stuck at environmental impact assessment (EIA) level; a deep seaport at Bakassi to cost between $1.7 billion and $2 billion (N720 billion), with project yet to leave site clearing stage. Its over three years since these projects were mouthed, their realization by this government looks next to hopeless.

Only two months ago, Governor Ayade began to take baby steps aimed at revamping the Tinapa Calabar, a N60 billion business and tourism leisure resort, also built by the Duke administration, and later upgraded with the Calabar International Convention Centre (CICC) and a monorail by Liyel Imoke, the immediate past governor, but all left to rot away since 2015 by the microbiology professor-led government. And then penultimate week, he began to speak about Obudu Ranch resort comprehensive revamping, combined with its aborigines’ development scheme, and an international cargo airport.

It is getting to the sundown of the Ayade administration, and Covid-19 has been taking great toll on the earnings of the Nigerian macro-economy and its 36 micro-economies, Cross River inclusive. The jury is already out with the verdict that, it would be the eighth wonder of the world for the Obudu-born professor to realize all these projects – jointly put at a rough estimate of  between N1.8 trillion and N2 trillion. Would Ayade surprise economic pundits by 2023 with his overabundance of projects? Time will tell.

E-bills payment swells by 8.57% in February despite dip in volume