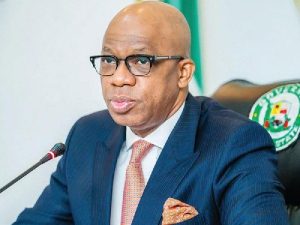 Governor Dapo Abiodun presented the 2022 appropriation bill estimate tagged ‘Budget of Restoration’ before members of the State House of Assembly for consideration and approval.

Addressing the lawmakers at the Assembly Complex in Oke-Mosan, Abeokuta, the governor  emphasised his determination to give priority attention to the completion of existing projects, with revenue and  employment generation set as basic targets.
Giving a breakdown of the projected  state funding, he said the Ogun State Internal Revenue Service (OGIRS) has an estimate of N56.30 billion, while ministries, departments and agencies (MDAs) were estimated at N96.87 billion, totaling N153.17 billion.
The governor added that statutory allocation (i.e. FAAC and VAT) is expected to be N73.01 billion,while the capital receipt, consisting of internal and external loans and grants, is estimated at N124.56 billion.
For recurrent expenditure, Abiodun said  a total of N75 billion is to be expended in paying salaries and allowances in MDAs, N28 billion would be expended on debt service obligations, while  total overhead costs of MDAs and government-owned enterprises will gulp  N51 billion.
Abiodun further informed the legislative arm that N170 billion was budgeted  for capital expenditure, recording an increase of N10 billion compared to the 2021 approval of N160 billion. He added that a total sum of N7.7 billion would be provided for transfers to the stabilisation fund to insulate and position the state towards unprecedented activities or economic shocks.
Business A.M. gathered that infrastructure occupied the largest share of the proposed budget estimate at N77.7 billion, which is 22 percent of the entire budget.
On the other hand, the sum of N56.1 billion was proposed for the  education sector, representing 16 percent of the total budget estimate, while the health sector is expected to gulp 10 percent of the total budget estimate at  N35.1 billion.
Olakunle Oluomo, speaker of the State House of Assembly, receiving the budget, assured the governor  of a speedy and thorough legislative process on the proposed budget with a view to sustaining the tradition of its passage in record time to comply with the January to December cycle in line with the international financial standards.
Businessamlive Website Stats