Oil prices were broadly unchanged on Thursday as OPEC-led supply cuts and U.S. sanctions against exporters Venezuela and Iran counteracted record U.S. crude output, rising inventories and falling estimates of global demand growth.
U.S. West Texas Intermediate (WTI) crude oil futures were at $56.44 per barrel, up 22 cents.
Prices were supported by efforts by the Organization of the Petroleum Exporting Countries (OPEC) and allies such as Russia to cut output and tighten oil markets.
“In our view, OPEC’s strategy is to rebalance the market as quickly as possible and exit the cuts by the end of June in order to grow production alongside shale producers in the second half of this year,” U.S. investment bank Goldman Sachs said in a note on Wednesday.
U.S. sanctions against the oil industries of OPEC members Iran and Venezuela have also had an impact, traders said.
Venezuela’s state-run oil firm PDVSA this week declared a maritime emergency, citing trouble accessing tankers and personnel to export its oil due to sanctions. 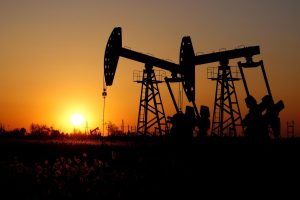 Within the U.S. sanctions against Iran, Washington granted its biggest buyers – mostly in Asia – waivers when the measures were re-introduced in November 2018 that would allow them to buy limited amounts of crude for another 180 days.
Washington has put pressure on these governments to gradually cut their oil imports from Iran to zero, but importers remain in talks over potential extensions, with India asking to be allowed to buy same volumes.
Despite these factors, oil remains in plentiful supply thanks to surging U.S. production.
U.S. crude oil stockpiles rose much more than expected last week, with inventories up by 7.1 million barrels to 452.93 million barrels, according to a weekly report by the U.S. Energy Information Administration (EIA) on Wednesday.
U.S. crude oil production was at a record 12.1 million bpd, an increase of more than 2 million bpd since early 2018.
That, along with the easing of a transportation bottleneck for low-cost U.S. Permian Basin shale oil, could lead to higher output, Goldman Sachs said.
“Unfortunately for the bull camp, the forward supply of crude oil is showing signs of increasing,” Marex Spectron said in a note.
The Organization for Economic Co-Operation & Development (OECD) said on Wednesday the world economy would grow 3.3 percent in 2019, down 0.2 percentage points from its last set of forecasts in November.
Businessamlive Website Stats