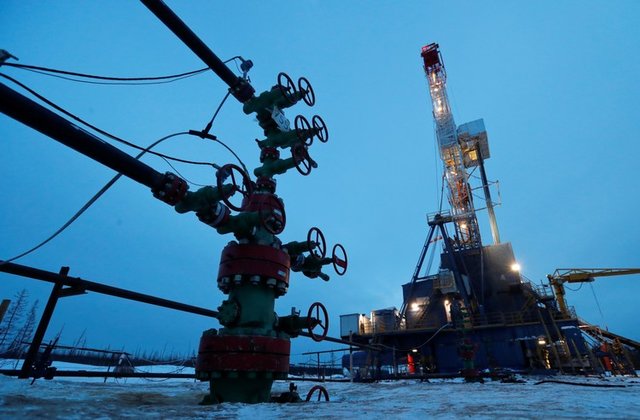 Brent crude futures rose 66 cents to $70.54 a barrel, a 0.9 percent gain, by 11:10 a.m. EDT (1510 GMT). U.S. West Texas Intermediate (WTI) crude futures rose 86 cents to $62.26 a barrel, a 1.4 percent gain.
U.S. crude inventories fell by 4 million barrels in the week to May 3, the Energy Information Administration said. Analysts had expected an increase of 1.2 million barrels.
Gasoline stocks fell by 596,000 barrels, while distillate inventories fell by 159,000 barrels, the data showed.
“The report was bullish … due to a sharp decline in imports,” said John Kilduff, a partner at Again Capital LLC in New York. “The fall in crude oil inventories also came despite lowered refinery operating rates.”
Prices have gained about 30 percent so far this year as the global supply outlook has tightened due to U.S. sanctions on crude exporters Iran and Venezuela, as well as supply cuts by OPEC, Russia and their allies.
Still, prices were pressured by the trade war between the world’s two largest economies. The United States will raise tariffs to 25% from 10% on $200 billion worth of Chinese imports effective Friday, according to a notice posted to the Federal Register. President Donald Trump had threatened the duties after China backtracked on a trade deal.
Chinese Vice Premier Liu He will travel to Washington for two days of trade talks this week, China said on Tuesday.
“The market is fearful that the other shoe is going to drop on the global economy if we get into a trade war; it will hurt oil demand,” said Phil Flynn, an analyst at Price Futures Group in Chicago. “So people have been bearish because of that.”
China’s crude imports in April hit a record for the month, at 10.64 million barrels per day (bpd), customs data showed on Wednesday. The country is the world’s biggest oil importer.
Saudi Arabia is expected to keep its crude exports below 7 million barrels per day in June, while output would stay under its production quota under a global deal to cut supply, a Gulf source familiar with Saudi oil plans said.
Azerbaijan’s oil minister said it had received assurances from Saudi Arabia, de facto leader of the Organization of the Petroleum Exporting Countries, that Riyadh would not take any unilateral decisions on the global oil deal until OPEC’s June meeting.

He was the very best of us, Buhari’s moving tribute to Abba Kyari