The senate in Nigeria began deliberations Tuesday on the proposed amendments of the provisions of the production sharing contract (PSC) law which could change the way the country works with multinational oil companies prospecting in its deep offshore and inland basin. 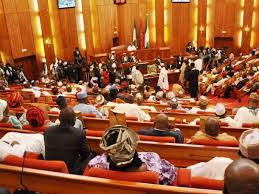 The bill being worked on is titled “Deep Offshore and Inland Basin Production Sharing Contract 2004 (amendment) Bill 2019” and has passed the second reading during Tuesday’s plenary and has now been referred to the Committees on Petroleum (Upstream) and Finance for further legislative work.

A statement from the office of president of the senate and signed by Jezrel Tabiowo, a special assistant, quotes Senator Albert Bassey Akpan, the sponsor of the bill as saying: “[The] bill seeks to amend section 5 of the PSC Act to bring the provisions of that section into conformity with the generality of the provisions of the Act and into congruence with the intendment and essence of Production Sharing Contracts.

“The PSC arrangement was offered by the Federal Government of Nigeria as a contractual arrangement for the exploration and production of petroleum in the 1991 licensing round,” he added.

Senator Akpan, according to the statement, further explained  that the fiscal incentives from the arrangement were distinct and absent from the provisions of the Petroleum Act and the Petroleum Profit Tax Act, which regulates the fiscal regime of other types of petroleum exploration and production arrangements.

“The Act provided in section 16 that where the price of crude oil exceeds US$20 per barrel, the PSC Act will be reviewed to ensure that the share of the Federal Government of Nigeria (FGN) in the additional revenue is adjusted to the extent that the PSCs shall be economically beneficial to the FGN and that in any event, the PSC Act shall be liable to be reviewed after 15 years from its commencement in 1993 and every 5 years thereafter,” Akpan noted.

“This amendment alters the royalty payable by the PSC contractors so that whenever oil and gas price increases the share of government increases with the automatic inception of the newly introduced royalty by price mechanism,” he added.

Also, during the plenary, the senate urged the central government to prioritize the development of the Oloibiri Oil and Gas Research Centre and Museum based in Bayelsa State.

It made the call in resolutions reached after consideration of a motion on, “The need to ensure immediate commencement of the Oil and Gas Research Centre and Museum, Oloibiri, Bayelsa State -Nigeria’s first oil field”.

Senator Biobarakuma Degi-Eremienyo (Bayelsa East), who sponsored the motion, said, in exhibition of the importance of the first oil field and the need to develop the foreign exchange earning tourism potentials of the area, the idea to build a world class museum of oil and gas was conceptualised, designed and foundation stone laid by President Shehu Shagari in 1983.

According to him, though the federal government removed the project from the National Commission for Museums and domiciled it with the Petroleum Technology Development Fund in 2011, the project still remains moribund.

The senate, therefore, urged the federal government to direct PTDF and contractors to mobilise to site to commence the construction of the Oil and Gas Research Centre and Museum as well as directed relevant senate committees to carry out intensive oversight on the implementation of the project.