By Dikachi Franklin, in Owerri
Motorists and commuters in  Imo State have been thrown  into hardship and frustration as a result of a strike  action embarked upon by the state chapter of the Independent Petroleum Marketers Association of Nigeria (IPMAN). 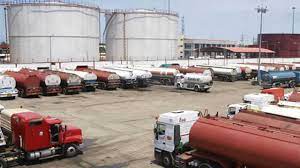 The sudden strike action, which caught members of the public by surprise, has led to a hike in transport fares by the few number of commercial buses and other vehicles,  as well as  motorcycle  operators on the road, that have increased their fares by above 50 percent higher than the normal fares.

Business A.M. reports that while all petrol filling stations in Owerri Municipal  Council were locked, roadside hawkers of the product that sold in jerry cans and other containers had a field day even as  fuel buyers scrambled to obtain the commodity at exorbitant prices.

Commuters, who used to pay N100 from such places as Amakohia, Akwakuma to Owerri metropolis now pay N200, while those from Obinze, Umuguma, Irete, Orogwe and Ogbaku pay N300 as against N150.
It was reliably gathered that the strange development was a fallout of a running battle between the state government  and the oil marketers arising from the refusal of the state government to honour an agreement reached earlier with oil marketers.
It was also learnt that oil  marketers had reportedly reached an agreement with the State Internal Revenue Service for its members who operated within the Owerri metropolis to pay an annual levy of N100,000, while those on the outskirts of the town should pay N50,000.
But the Hope Uzodimma led government had on assumption of office in January 2020 unilaterally hiked the levies   to N1 million.
This came as a  surprise  to  the oil marketers, and  the blunt  refusal of the state government to abide by the recent court ruling in favour of the marketers, whose member in Orlu lost his filling station through demolition by the state government, infuriated them.
As at the time of writing this report only few vehicles were on the roads and some business people who operate on generating sets were seen packed up and discussing the issue of strike action and lack of fuel  for their businesses to remain afloat .
When contacted, the state commissioner for information and strategy,  Declan Emelumba said that efforts were on top gear to resolve the matter.
Businessamlive Website Stats