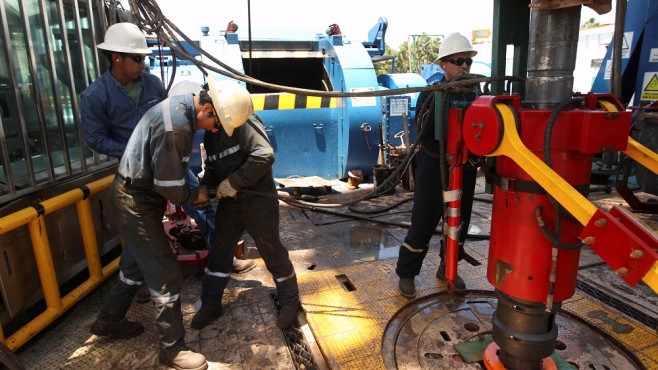 Crude fluctuated between gains and losses as investors prepared for a fifth straight rise in U.S. crude inventories and oil tracked the U.S. equity market.
After spending hours in the red, futures edged higher in New York on Wednesday, mirroring moves in the S&P 500 Index. Domestic crude stockpiles probably increased 3.1 million barrels last week, according to a Bloomberg survey. Plus, the Energy Information Administration sees output at major U.S. shale plays rising in March. Yet, losses remain limited due to geopolitical risks.
“That continued growth in shale production that they are forecasting really undercut the strength that has been in the market because of all the geopolitical tensions that abound, from Venezuela to Nigeria and Libya,” said John Kilduff, a partner at New York-based hedge fund Again Capital LLC. Crude has also been closed correlated with the equity market and we can see that today, he said.
Crude has climbed more than 4 percent this month in New York as the Organization of Petroleum Exporting Countries and its allies work to trim output. However, the ongoing U.S.-China trade war has continued to threaten global economic growth, as well as demand. In the U.S., crude production remains near 12 million barrels a day.
West Texas Intermediate for March delivery, which expires Wednesday, added 22 cents to $56.31 a barrel at 10:43 a.m. on the New York Mercantile Exchange. The more active April contract gained 14 cents to $56.59.
Brent for April settlement slid 17 cents to $66.28 a barrel on the London-based ICE Futures Europe exchange. The global benchmark crude was at a $9.69 premium over WTI for the same month.
“We remain broadly constructive, with the Saudis showing that they are committed to bringing the market back to balance, with them cutting output significantly more than they agreed to,” said Warren Patterson, senior commodities strategist at ING Bank NV. “There is somewhat of a disconnect between markets, with the U.S. appearing relatively more bearish. We continue to see persistent U.S. crude oil inventory builds.”
The American Petroleum Institute is scheduled to release its weekly count of stockpiles later Wednesday, followed by the U.S. government’s tally on Thursday.