The recent hijack of an oil tanker off Bonny, Rivers State, Nigeria and kidnapping of the vessel’s crew have left glaring realities of the wide security gap on Nigerian waters. 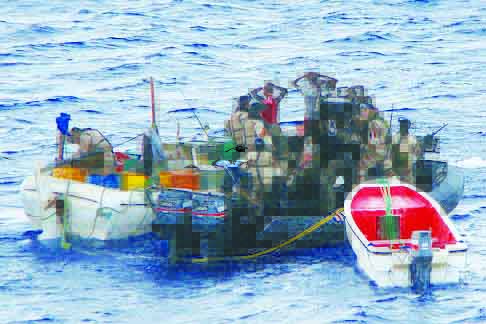 A gang of pirates had kidnapped 19 sailors after waylaying then boarding a VLCC, named Nave Constellation which was loaded with oil. The tanker vessel was moving crude oil when she was attacked by the pirates who abducted 18 Indian and one Turkish crew off the vessel, leaving only seven crew members aboard the ship.

The whereabouts of the Hong Kong-flagged crude supertanker, owned by Navios Maritime Acquisition Corporation, is still unknown, as Nigeria’s maritime security agency and the country’s navy search for them.

Security firm Dryad Global believes the attack is part of a growing trend, with six incidents and four kidnappings in the area of Tuesday night’s incident. The string of attacks suggests a well-armed and resourceful pirate action group, most likely operating from one or more “mother-ship” type vessels, with other smaller, nimbler crafts at their disposal.

One Earth Future’s annual State of Maritime Piracy report highlights incidents of hijacking, kidnapping, robberies and boarding attempts on the high seas. In recent years, they have recorded a steady drop in the number of incidents in East Africa and around Somalia in particular, which was a hotspot for pirate attacks for years. This pullback has allowed West Africa to take over as the continent’s biggest piracy hotspot.

This is happening as the Nigerian Ports Authority (NPA) fights to stop a maritime security arrangement between the Nigerian Navy and a private security firm, Ocean Marine Solutions (OMS) Limited to maintain the Secured Anchorage Area (SAA) for multinational shipping lines coming to Lagos ports. But incessant incidences of piracy on the waters around Bonny, Port Harcourt and other parts of the Niger Delta offshore, are enough to prove that the current arrangement between OMSL and the Navy at the SAA, near Lagos needs to be adopted and replicated in other parts of the nation’s waters where security has eluded operators.

Maritime experts worry that there is an obvious inability of the government to provide adequate equipment and platforms for the Navy to provide security on the waters. Where this is true, they argue, it is only expedient that the private sector be leveraged to cover the gap.

Emeka Akabogun, a popular maritime lawyer said, “The navy needs to be further strengthened with funding to better equip it for acquisition and maintenance of operational platforms. NIMASA has a quasi-security mandate, which informs its MOU with the Navy. Under the recently passed Suppression of Piracy and other Maritime Offences Act, its powers have been further enlarged for dealing with security issues. In the circumstances, I think NIMASA, as opposed to the NPA, is the more relevant agency of government for regulation of security related issues involving merchant vessels.”

Osuala Emma Nwagbara, another frontline maritime lawyer said the Nigerian Navy in peace time has statutory duty to ensure the safety and security of our national and territorial waters, even up the nation’s EEZ. “Ordinarily the Navy is obliged to maintain adequate security presence at the anchorage where ships wait before calling at the berths, but where this lacks, there is nothing wrong with OMSL getting the Navy to maintain adequate presence at the safe anchorage, whether this is secured by an MoU or otherwise. The most important thing is that safety and security are assured vessels waiting at the anchorage,” he said.

Dakuku Peterside, director general of NIMASA said on Thursday in Abuja that the ship contacted his agency and the Nigerian Navy only after she became distressed.

This revelation confirms reports of vessels working on Nigerian waters without observing the country’s Cabotage laws and paying statutory dues and fees. The situation is a strong indication that the apex maritime regulator, NIMASA has severe loopholes in its operations.

“However, that isn’t an issue because life is more precious than any other consideration. We have also immediately contacted the naval unit around that area and they have gone to work. The Navy has established contact with the remaining crew members onboard the vessel and the nine persons onboard the vessel are safe and the vessel is safe.”

Dakuku believes that Nave Constellation’s attack “ultimately serve as catalyst for us to fast-track what we are doing to safeguard our waterways so that commerce can thrive again and people can do economic activities without fear or hindrance.”

According to a study published by the Centre for Strategic & International Studies, titled, “Combating Piracy: Challenges and Opportunities for Regional and Private-Sector Involvement,” published June 20, 2012, the international community is supportive of the idea of assisting government forces in combating sea crimes. For instance, the study identified with local Somali forces in combating piracy.

The study says, “private industry may represent an opportunity to fill this vacuum by assisting local governments in building their law enforcement capacities. The private sector is already involved in combating piracy at sea and has met with a degree of success in filling counter-piracy roles that traditional forces have been unwilling or unable to take on.

“In recent years, the deployment of private security forces—referred to as Privately Contracted Armed Security Personnel (PCASP)—on board ships traveling through high-risk areas has been greatly expanded. These armed teams serve as both a deterrent as well as an active defense against pirates and have met with praise from the US Department of State as effective and professional. As of March 2012, no ship employing PCASP has been successfully hijacked.”

The International Maritime Organisation does not take a position on the carriage of arms on board ships. It is the responsibility of individual flag states and coastal states to determine if the use of Privately Contracted Armed Security Personnel (PCASP) is appropriate, legal and under what conditions. The organisation has issued guidance to flag, port and coastal states; as well as to shipowners, ship operators and shipmasters on the use of PCASP on board ships in the High Risk area. The NIMASA and the Navy, not the NPA make the decision here.

As the joint Senate committee on Navy, Finance and Marine Transport probes the issues around the SAA, the two maritime lawyers have insisted that the Nigerian Ports Authority (NPA) does not have regulatory powers to dismantle the SAA.

The maritime lawyers, who responded to enquiries by business a.m. on the matter, said the NPA lacked constitutional powers to end OMSL’s contracts with shipping lines, as it cannot determine or regulate maritime security.

Nwagbara, managing partner, Maritime and Commercial Law Partners, Apapa, said while there is a clear security gap on Nigerian waters which OMSL identified and sought to fill by way of a business venture, NIMASA is statutorily in charge of safety and security on Nigerian waters.

He said, “I read elsewhere that OMSL argues that it was approved by NIMASA to operate the safe anchorage. If NIMASA gave such licence to OMSL, it means the company is legitimately doing business on the waters.  NPA is not in charge of safety and security and anchorage is not a port as defined in NPA Act. So, while it may make business sense to bring the presence of OMSL to the notice of NPA, it is doubtful if failure to do so amounts to infraction of any section of NPA Act.”

The NPA recently said it was taking steps to dismantle the Secure Anchorage Area (SAA), operated by OMSL over security concerns, insisting that provision of security in the nation’s waters is not a business venture, but a constitutional responsibility of the Nigerian Maritime Administration and Safety Agency (NIMASA), Nigerian Navy and the Marine Police.

“However, the question may arise whether the location of the safe anchorage area is within a port or a pilotage district, in which event the authority may have a claim to powers of regulation over the area. This is not clear. If as advertised, the secure anchorage area is located off the coast of Lagos beyond the Lagos Fairway Buoy, I don’t see how NPA could possibly exercise jurisdiction over it under existing law. The business of NPA is limited to the port environment, which truly, it is yet to effectively undertake. While it has the power to regulate traffic within the limits of or approaches to a port, the reality is that the area in contention is outside the conventional definition of these locations,” Akabogu stated.

Nwagbara however said, “There was a time when calling ships had foreign private companies providing them security and we all rose against that citing the Nigerian Navy as the only authority statutorily empowered to bear arms on our waters for security purposes. So if any agency of government must complain of infraction of its enabling law, that agency should be NIMASA, and Navy, not NPA.”

He also faulted claims by the NPA that the SAA has raised costs for shipping lines which patronise the anchorage.

“Overall, the complaint of NPA is that the charges collected by OMSL is increasing shipping charges in our ports. To me that perspective has not reckoned with the cost implication of just one incidence of piracy attack at the anchorage, for all of ship owner, shipper and the final consumer in the present and for the future,” he concluded.