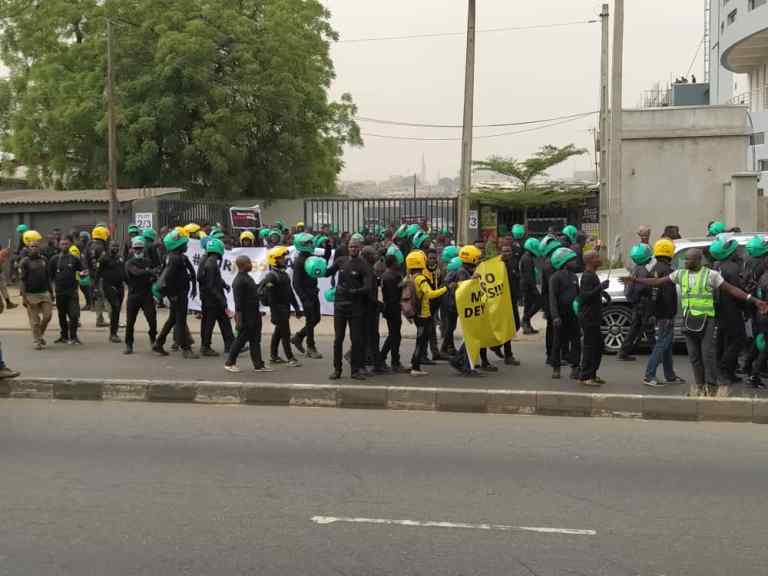 The effect of the ban of commercial motorcycles in some key areas in Lagos is gradually creating holes in the pockets of some residents, as they are forced to use the services of the car-hailing firms. To explore the new opportunity, the car hailing firms like Uber and Bolt among others have increased their charges.

A customer who identified himself as Wole Akinde told our correspondent that he had noticed the surge price when he ordered a Bolt cab from his office around Opebi to Ojota, a trip he make even before the ban.

When the trip ended, he was shocked when he found he had to part with N1,300 as the trip charge and not the usual N500-800 price range he used to pay.

Similarly, a customer who uses Uber, Olamide also confirmed the surge, saying “Since the Okada and Keke Napeps started complying with the ban directive, I noticed the hike in the price of Uber by over 50% within the few times I’ve ordered it.”

For Jenifer Madueke, the hike in price was unfair and unreasonable.

“Journey that I usually take with Keke N100 or Uber at N500 is now N1000- N1200. Even when there is traffic in the past, the highest I have paid as fare was N700. This is unreasonable, as they are only using this ban to take advantage of people,” Madueke , another Uber patron lamented.

Other customers interviewed had the same complaint, and called on the firms to review their prices.

What you should know; This is not the first time Uber and Bolt would adopt surge pricing as a strategy to motivate or attract drivers to go online during periods of high demand. This pricing mechanism allows the cab-hailing firms to temporarily raise prices on their platforms when the number of rider requests shoots up.

With the ban of the Okada and Keke, commuters have had to struggle their way to their destinations which made the cab-hailing firms a preferred choice if one was not willing to trek, as a result of that, the high demand was caused.

Explaining the possible causes of surge pricing, a Bolt driver, who pleaded anonymity, explained that the surge usually happens when there are many rider requests and not enough drivers on the ground to attend to them. In this case, the company uses the pricing to attract drivers into going all out to attend to customers.

He also said that another likely reason is when the pickup points are far from where the drivers are. In this case, the surge would motivate the driver into burning his fuel to go all the way to pick the customer.

When we contacted the Head of Communications of Uber West Africa, Efosa Aiyevbomwan, confirmed the surge saying it is as a result of dynamic pricing.

“Dynamic pricing is automatically triggered when there is a sudden flood of requests, and this is used to encourage more drivers to get out on the road in response to increased demand.”

However, the Uber’s spokesperson added that the development is only temporary as the price would go back as soon as possible.