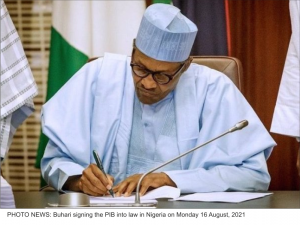 e Organisation of Petroleum Exporting Countries (OPEC), has raised optimism that Nigeria, the world’s 11th highest oil producer, stands a chance to raise its crude oil reserves from 37 billion to 40 billion barrels following the signing into law by President Muhammadu Buhari of the nation’s Petroleum Industry Bill (PIB).
In a congratulatory letter addressed to President Buhari, Mohammed Barkindo, secretary general, OPEC, commended the president’s PIB approval, which he described as the inauguration of a new era for the petroleum industry following years of legislative efforts to strengthen the legal, regulatory, fiscal and governance framework of the sector.
According to him, the new law will enhance the Nigerian petroleum industry’s reputation, open the door to new investments, and ultimately boost its position to meet the world’s growing demand for energy.  He added that the enactment of the legislation is especially timely as the investment outlook had in recent times been clouded by efforts aimed at accelerating a lower-carbon future.

He noted further that the law will help harness Nigeria’s potential to achieve its programme of raising oil production to four million barrels per day and boost oil reserves to 40 billion barrels.
Also dwelling on Nigeria’s vast natural gas reserves to provide clean and efficient energy, Barkindo said the abundant natural resources will be vital to supplying world markets with a broad portfolio of energy options, and support global efforts to alleviate energy poverty as outlined in the United Nations’ Sustainable Development Goal 7.
“The passage of the PIB by both houses of the National Assembly on 16 July 2021 and your act of signing it into law coincide with another significant milestone in your country’s history – the 50th anniversary of Nigeria’s Membership of OPEC,” he noted.
Commenting further on Buhari signing of the PIB into law, the OPEC secretary general noted that the “golden” moment provides a unique opportunity to reflect upon Nigeria’s rise as a global energy supplier and partner.
“Since the 24th OPEC conference on 12 July 1971, when Nigeria received a unanimous and enthusiastic welcome as the 11th member country of the organisation, our country has come to symbolize Africa’s leadership within OPEC and its pivotal support for global oil market stability,” he added.
Businessamlive Website Stats