Cattle farming, which is the domestication and management of bulls and cows majorly for beef and milk production, is a highly valuable and essential practise that has been in existence over many generations cutting across virtually every country around the world. 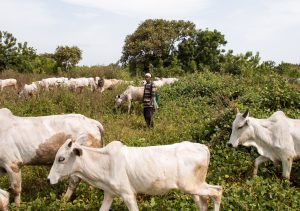 Cattle is so highly valued that Grand View Research, the world’s largest business intelligence-enabled market research database estimated the global beef market size at $300.6 billion in 2017 with a projection of a 3.1 per cent increase between 2017 and 2025.

However, cattle production in Nigeria is far from a positive tale as the predominant cattle herding system (pastoralism) has in recent times, proven to be more of a societal nuisance than an economic asset.

The nomadic Fulanis, who make up the highest chunk of cattle herders in Nigeria, are reputed to be the largest pastoral nomadic group in the world, sustaining their herds through open grazing, a tradition they have practised consistently for over three centuries. This method of grazing, also known as transhumant pastoralism involves herding cattle across kilometres of land in search of grass and water (greener pastures) to feed the cattle. The nomadic Fulani pastoral group also consists of social units without a permanent residence as they shift camps frequently, moving their cattle across long distances, migrating and often intruding into spaces belonging to other tribes. As a result of their frequent migrations, the sight of roaming cattle around farmlands, residential areas, urban centres, busy roads and even airports, both during the night and daytime, has become a common practice. This has in many cases, resulted in fatal road accidents, environmental pollution, destruction of farmlands and many other mishaps across many localities in the country. In addition to these, the constant struggle between crop farmers and the cattle rearers has led to skirmishes, attacks and reciprocal attacks, loss of lives, properties and human displacements. As humans and animals get killed or impaired while crop yields are destroyed in the midst of the conflicts, food insecurity which has continually been a major challenge is further worsened while manpower to support economic growth is drastically reduced.

These, among several other conflicts have led to heightened inter-ethnic tensions across the country, spurring agitations by many southerners for the immediate departure of the cattle herders from the South while agricultural analysts have suggested an end to open cattle grazing, calling for the adoption of a diversified cattle rearing system that involves intensive management and cattle ranching system across all states of the federation.

Enraged by the troubling effects of the spates of violence and clashes between cattle herders and farmers in the south-western region, as well as in Ondo State communities, Rotimi Akeredolu, the Ondo State governor ordered that herders illegally operating in the state’s forest reserves vacate the state. The move didn’t sit well with many northern stakeholders, most especially the Miyetti Allah Cattle Breeders Association of Nigeria (MACBAN), who were quick to express their displeasure over the governor’s decision.

On January 25, the South West governors held a security stakeholders’ meeting in Ondo State which had in attendance, Rotimi Akeredolu of Ondo State, Gboyega Oyetola of Osun State, Kayode Fayemi of Ekiti State, Seyi Makinde of Oyo State, Mohammed Abubakar of Jigawa State, and Abubakar Bagudu of Kebbi State, security chiefs,  as well as MACBAN leaders. At the end of the meeting, the six governors and MACBAN leaders reached an agreement to ban all forms of open grazing in the South-West region.

The ban on cattle grazing was also announced in the South-east region of the country and affirmed by David Umahi, Ebonyi State governor and chairman of the South East Governors Forum. Umahi also emphasised the ban on movement of cows by foot into any of the South-eastern states, calling on security agencies to flush out all criminal elements from the forests located in the zone.

Reacting to the developments, Nigerian governors of the northern region enjoined the federal government to provide funding for the establishment of ranches across the region.

Speaking on behalf of the northern governors, Simon Lalong, Plateau State governor and chairman of the Northern Governors’ Forum, explained that the northern state governors had been in support of ranching over time but have not been given the needed financial support by the federal government.

“We need some grants to start so that these people will not be moving here and there. We need to also keep them in one place. It’s business. So definitely, that’s the only way to control the insecurity,” he stated.

Lalong further noted that the rise of banditry and the recent quit notices by some state governments in the western part of the country have created the urgency of ranching as the means of controlling the insecurity prevalent in the country, adding that all stakeholders, including cattle herders across the country, welcome the idea of ranching.

Commenting on this, Tolulope Ogboru, an environmental law researcher, noted that there is no doubt that in the long run, ranching is a more sustainable form of rearing technique but a sudden switch as is being canvassed by the state governments is not advisable.

Open grazing and nomadic cattle rearing, she stated, is the practice known to nomadic pastoralists for centuries, so in requiring this transition to ranching, this fact ought to be considered in any legal framework going forward.

Dwelling on this, Oluwatoyin Adejonwo-Osho, a senior lecturer at the Faculty of Law, University of Lagos, argued that the ranching method, as stipulated by the law, requires that the pastoralists be highly trained and educated on this modern mode of cattle rearing.

The environmental and civil law lecturer further stated that switching to a new form of cattle rearing suddenly without putting in place appropriate mechanisms appears inequitable.

Despite the negative reports trailing the activities of the nomadic pastoralists, their relevance to Nigeria’s cattle industry and the market as a whole cannot be overemphasised. More so, their absence in the cattle industry, according to market reports, will have an adverse effect on the cost of beef and other cattle derivatives in Nigeria considering the fact that cattle meat is one of the most consumed and affordable protein sources in the country.

Having this in view, agricultural experts and analysts raised suggestions on how alternatives to open grazing can be actualised without endangering cattle production in the country.

Adesina Aderibigbe, a professor of Comparative Animal Nutrition, Obafemi Awolowo University, asserted that diversifying cattle rearing systems in Nigeria whereby cattle are raised in a confined area with a sustainable supply of food, water and medical needs is the most ideal way that cattle breeding can be properly managed.

He noted that cattle breeding for maximum production is what is being practised in the top cattle producing countries around the world, adding that if the method is replicated across various states of Nigeria, it will reduce the competition for scarce grass and also encourage engagement of several individuals, government and other organised establishments which will lead to an expansion in Nigeria’s cattle market. Cattle rearing, according to him, is not a Fulani business as any Nigerian has the capacity to be able to do it successfully under the right management practices.

He added that however expensive the procedure might seem to be, the return on investment is way higher as it will increase the daily weight gain of the animals and also increase their market value.

Zanau Hassan, managing director, Farmfields Agro-Allied Services, Jalingo, Taraba State noted that forest reserves are no longer readily available due to urbanisation and increased crop farming, creating the necessity for an intensive management system. This, he stressed, will make the cattle rearer able to maximise yield of cattle either in terms of milk or meat. He also said that it will enable the cattle herders to derive the maximum benefit of the value chain activities along the livestock production activity.

“Looking at the adverse destruction open grazing has caused, the country has no choice at this point in time than to adopt the intensive management system for cattle production,” he concluded.

Walter Chigbo, chairman of Nkeonyemetalu Farms and Agro-Allied Ventures located in Orumba North Local Government Area of Anambra State noted that ranching is a more profitable way of rearing cattle. The Fulani herdsmen, he said, either do not know that it is more profitable to rear cattle in a secluded place, or they have become used to being nomads and cannot adjust.

Speaking about his fully mechanised farm sitting on about 200 plots of land, Chigbo disclosed that the farm has gone into full cattle ranching of local cattle. He maintained that the native cows known as ‘‘efi Igbo’ are doing relatively well and are sure to make good gains in the cattle market.

“Study has shown that it is better to rear cattle in a secluded place. Feed them well, and they rest well too, and before long, you will see how fat they will grow,” he added.

On their parts, Tolulope Ogboru and Oluwatoyin Adejonwo-Osho opined that there should be a gradual transition to ranching. They also advocated for the establishment of cattle grazing reserves in the first instance for a period of time determinable by all stakeholders, while the pastoralists are being prepared to adopt the ranching method of cattle rearing.

They added that resolutions arising from discussions in this regard should be included in the federal government’s policy on livestock management and in the state laws, adding that such laws should also designate mutually agreed routes for the grazing reserves, including designated routes for the transhumant pastoralists as they enter the country.