The world is rapidly becoming interconnected through advancements in technologies such as robotics, artificial intelligence (AI), machine learning (ML), the Internet of Things (IoT), and much more. These technologies are associated with the Fourth Industrial Revolution (4IR), and increased intra-African trade can help the continent apply and develop 4IR technologies to develop its economies and infrastructure.

Nineteen months have passed since trading began in the African Continental Free Trade Area (AfCFTA), which is the largest free trade area in the world as it holds 54 out of 55 members of the African Union (AU). The agreement aims to revolutionise trade on the continent by creating a market of almost 1.3 billion people, with a combined gross domestic product of $3.4 trillion. The trade area holds 93 percent of Africa’s population and could attract investment into the region’s digital infrastructure and 4IR to build sustainable economic development. This industrial revolution uses disruptive technologies, such as artificial intelligence, machine learning, and the internet of things, to collect and analyse data to solve complex problems in Africa’s physical and digital economy. Digital solutions such as automated cargo tracking and digital reporting of non-tariff barriers are used for efficient cross-border trade across Africa, with the Nigerian Customs Service (NCS) working on a cross-border trade platform. Aside from trade, Africa struggles with access to good quality data, and 4IR technology can digitise the current infrastructure to collect and analyse the metadata to mitigate against and predict future natural disasters. 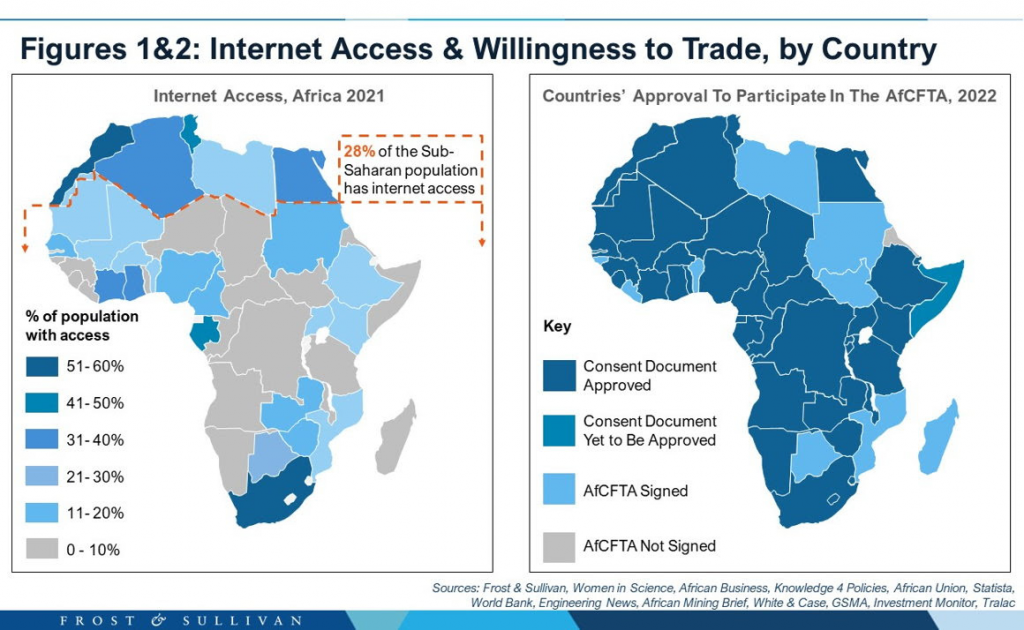 For example, a digitalised map of KwaZulu-Natal could be used as a duplicate (a digital twin) with plug-in technologies to predict the extent of future floods, generate flood routing plans and create the safest and fastest evacuation routes for civilians.

The AU realised the socio-economic benefits of investing in digital infrastructure and has created the African Digital Transformation Strategy (ADTS), which plans to create a single pan-African digital market by 2030. However, creating this market and reaching this goal requires Africa to heavily invest in creating an affordable, accessible, and reliable digital infrastructure. The issues with internet access are not only a lack of electricity but a lack of broadband penetration. In 2020, only 28 percent of sub-Saharan Africa’s population was connected to the internet, but 89 percent of their web traffic was generated through accessing the internet via smartphones. 20 percent of the population lives in areas without mobile broadband coverage. However, there is an opportunity to quickly increase mobile internet usage as 53 percent of the population live in an area with mobile broadband coverage but do not use mobile internet. The two maps below show the current internet access by country and how many countries have consented to trade in AFCTA. The willingness of sub-Saharan countries to participate in the trade area can help increase mobile internet usage in the countries with low access.

According to the World Bank, sub-Saharan Africa requires more than $100 billion in capital to achieve a reasonable level of digital access by 2030. This is a large sum of money; however, policies that support intra-African trade and digital transformation are attracting investors—most investors funding digital infrastructure projects in Africa fund through equity investments. An example is Convergence Partners, a private equity firm specialising in Africa’s digital infrastructure, announcing it had successfully closed its Digital Infrastructure Fund (CPDIF) at $120 million in mid-2021. Another is Digital Realty’s $500 million investment commitment to Africa and Liquid Intelligent Technologies’ (Liquid) $500 million investment into its subsidiary, Africa Data Centres (ADC).

In conclusion, physical and digital pan-African trade is attracting capital that can advance the use of 4IR technologies to develop Africa’s economies and infrastructure.

SISONKE MGWEBI, a consultant with Frost & Sullivan, gives an insight on how pan-African trade is enabling Africa’s 4th Industrial Revolution.