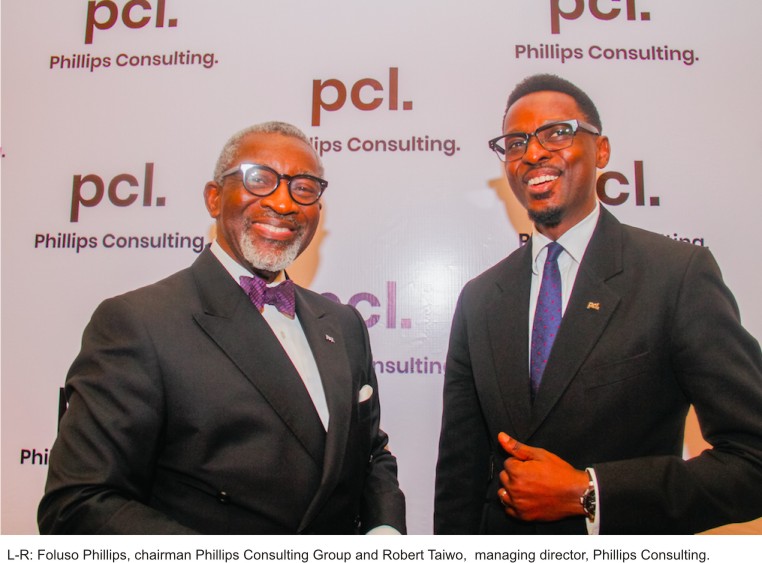 Phillips Consulting Limited, an indigenous business and management consulting firm, Thursday announced its rebranding with the launch of a new logo. It also announced a new leadership, which it said will drive excellence in delivery through a people centric approach.
The firm, now to be simply called ‘pcl’, said its rebranding is to create visibility in the market place and speak to the future as to “who we are“, according to Robert Taiwo, the firm’s new managing director.
“We wanted to refresh our brand, whilst not taking it away from the strong reputation we have built over the years.
He said the founder, Foluso Phillips, wanted to create an identity that would begin to separate him from the institution he has built by de-emphasising his name and changing the name to PCL which also creates flexibility to do more exciting things beyond the label of consulting.
He told business a.m that the rebranding is about “differentiating what we do from who we are, and what we are passionate about as a business.”
“At Phillips Consulting, we are inspired  by the challenge of transformation and passionate about the power of people,“ Taiwo said of the company.

He noted that the firm’s people focused approach to driving organisational transformation since inception will now be taken to another level.
On who Phillips Consulting is, Taiwo explained that the company is about presenting the human face of consulting.
“We work with organisations collaboratively to help transform a change by moving them from one space to another. What differentiates us from other consulting firms is that we work within organisations as opposed to just coming in and delivering a report. We follow through implementation and make sure businesses are powerful and sustainable,” he also said.

Foluso Phillips, founder, outgoing managing director and current chairman of the company described his tenure as fulfilling, challenging and rewarding.
The rebranding, which coincides with the 26 year anniversary of the firm gave Phillips an opportunity to discuss how he’s been able to sustain the business for almost three decades.
He said: “It’s great to have achieved my own vision, step away, move on and more importantly let the next generation define the next 25 years. It’s personally refreshing for me  to see my vision of building a sustainable institution to outlive us all, becoming a reality.
“With Rob at the helm of affairs and the redefinition of the firm as personified by a simple but refreshed brand image, I feel that a new generation is being truly born at Phillips Consulting. I believe there are exciting times ahead for us and out innumerable clients,“ he added.

For him, the firms biggest achievement has been for the company to remain on its feet for so long and to have produced so many consultants.
“We have trained so many people as part of the service we provide and being given a recognition as one of the leading consulting firms even though we are indigenous,“ he noted.

Advising the new managing director, Phillips said: “He’s got to have his own style. The fundamental thing is you’ve got to win the heart and soul of those who work with you. Once you get that that convenantal relationship, people will always go the extra mile to do whatever needs to be done.“
Beyond that he further advised that the management observe the rules of watching cost, treating people right and being operationally efficient.
Businessamlive Website Stats