Nigerian ginger is considered one of the best in the world due to its unique aroma, pungency and high content of oleoresin oil which is a highly sought-after ingredient in the global market.

Florence Edwards, a former president of the National Ginger Association of Nigeria (NGAN), who attested to the distinctive quality of the country’s ginger, noted that it is being requested for by the Arabs, Asians and by people all over the world who have testified that Nigeria has the best and spiciest ginger in the world. 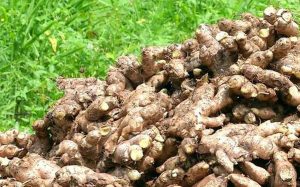 Gagarin Madaki, president, National Ginger Association of Nigeria (NGAN), who disclosed this recently in Kaduna, explained that the situation was partly due to poor post-harvest handling of the commodity by Nigerian farmers. Madaki also observed that Nigerian ginger is sold per bag rather than per kilogramme, leading to income constraints for producers and marketers.

The NGAN president emphasised the need to adopt a new strategy to ensure Nigeria’s comparative advantage in ginger production receives a boost by way of producing and exporting quality produce, leveraging on the international best practices. In addition, he pointed out the issues of poor post-harvesting handling, use of inorganic chemicals, among others as limiting the revenue-generating potential of ginger in the international market, adding that it was also imperative to improve farmers’ productivity.

According to Madaki, ginger is the fourth-largest priced commodity in Nigeria which makes it a good foreign exchange earner. Highlighting some of the benefits of the commodity, he noted that aside from the economic impact of ginger and relevance in the brewery and food industry, it is also of huge benefit in the health industry as it is used to help fight infections, lower blood sugar and reduce heart attack risks.

“It is used in the manufacturing of pharmaceutical drugs and during COVID-19, ginger value skyrocketed by about 500 percent because people know the impact it has on cold, cough and all that,” he said.

The president, therefore, encouraged farmers to produce based on international best practices for improved benefits.

A 2019 data by the United Nations Food and Agriculture Organisation (FAO) ranked Nigeria as the second-largest ginger producer in the world with an annual output of 691,239 tonnes, surpassed only by India with 1.78 million tonnes yearly production.

According to Tridge, an international market trend data provider, the global export value of ginger in 2021 stood at $1.15 billion, while Nigeria was ranked the ninth largest exporter with a 1.02 percent share in the global export market.

Nigeria’s position, experts argue, is an indication that the country’s export potential is under-explored, considering that in the year under review, countries with lesser production capacity such as China and The Netherlands dominated the export market with 47.2 percent and 12.35 percent of global market share, respectively.

Commenting on this, Ado Saleh, chairman, NGAN, Jigawa State chapter, noted that though Nigeria is one of the largest producers of ginger in the world, many farmers lack the financial resources, facilities and knowledge base to operate beyond local production standards.

Saleh also pointed out that the lack of processing facilities has hindered quality production as most of the ginger produced in the country are exported in their raw forms, which at times do not meet international standards.

He enjoined farmers, individuals and organisations in the ginger value chain to intensify efforts to increase production and export of the agro-commodity which, in turn, would bolster financial freedom for the individual farmers and market participants, and elevate the country’s foreign exchange revenue.

In a chat with Business A.M., Adua Sunom, a ginger producer from Kachia Local Government Area, Kaduna State, explained that a large number of ginger farmers are smallholders who still rely on traditional methods of cultivation, rather than modernised farming. Sunom said that the farmers and marketers also lack business skills and knowledge that are attuned to the export market.

According to Sunom, these farmers are only familiar with the local markets where the demand for ginger is relatively small in comparison to global demand.

“Ginger production in the country is laborious as most operations including planting, mulching, fertilising, weed control, harvesting, and processing are done manually rather than with mechanised equipment. Also, most of the farmers do not know the actual value of the commodity in the global market and are often exploited by middlemen who serve as a link between the farmers and the market,” he said.

He further said the inadequate recognition and exploitation of ginger potentials by producers and marketers alike pose serious setbacks to dominance in the global market.

Sunom called on the government to provide an enabling environment for farmers to attract investments. He also urged financial institutions to support intensified production and marketing by creating investment platforms and funding opportunities for producers and marketers.

He suggested that more attention should be given to ginger processing and value addition, noting that it plays a key role in the value chain as it ensures that the country’s ginger meets international quality standards for foreign consumers.

On his part, Kenneth Obiajulu, an agro-exporter and chief executive officer of AgroCorp International Development Limited, called for more investment in the Nigerian ginger production value chain, noting that it was time to make Nigeria earn its place in the global export market of ginger.

“When thinking of ginger, many people automatically think of India and China, the two powerhouses of ginger production and consumption globally, but what many do not know is that the second-largest producer of ginger is located right in the heart of Africa,” he said.

Obiajulu called for strict adherence to international best practices in the production, processing, and packaging of the commodity in order to gain international relevance.

The agripreneur noted that Nigeria is a country with year-round ginger production which can offer a constant supply to meet both local and international demand. He also stated that ginger could be sold in the local and international market either as wet ginger or dry split ginger, adding that dry split ginger is of high demand in the export trade.

Globally, ginger is recognised to be one of the healthiest perennial herbs and has been verified by medical practitioners to possess anti-inflammatory properties that aid in alleviating pain and swelling associated with osteoarthritis. It is also used as a digestive aid for diarrhoea, nausea, vomiting, and stomach upset occurring from motion sickness, pregnancy, cancer chemotherapy, among other medicinal uses.

Ginger is also utilised as a key condiment or flavouring agent in salad dressings, tomato ketchup, sauces, pickles, curry dishes, snacks and other local as well as international delicacies.

The acceptance of ginger in the pharmaceutical industry has further strengthened the ginger market, making it one of the most exported and imported spices globally, with Europe serving as the highest ginger importer market. Its application is further expanding in the cosmetics and personal care industries for manufacturing essential oils and soap.