On August 2, sub-Saharan Africa’s driest country, Namibia, inaugurated a mega container terminal at one of its four seaports. The 750,000 TEU per annum capacity project done in partnership with China cost $268 million (about N96.48 billion). 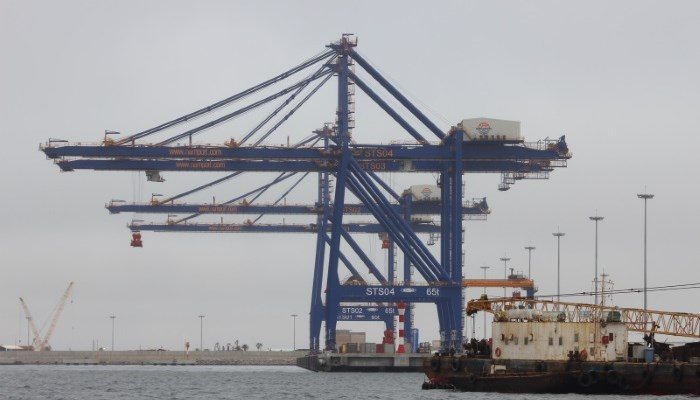 One will appreciate the size of the project when compared with the fact that APM Terminal in Apapa, which prides itself as West Africa’s largest container terminal with a capacity of 1.2 million TEUs is wholly concessioned out.
With only a population of 2.6 million people, Namibia has four seaports, namely the Port of Walvis Bay, Port of Swakopmund, Sandwich Harbour and the Port of Luderitz. They are working at full capacity. Namibia’s population is about one percent of Nigeria’s 203 million people! Yet, the country has more number of seaports, when you consider that half of Nigeria’s seaports are in comatose. The Apapa port and Tin Can Island Port in Lagos have since exceeded their capacity, leading to a nightmarish situation.
While Namibia was building a whole port with N96 billion, Nigeria was scouting for N50 billion to dredge one of its moribund ports, the Calabar port. In real countries, money works magic, but in Nigeria, money is looted in a magical manner.
Namibia’s new port project was an extension of the Port of Walvis Bay. Works on the expansion of the terminal started in 2014 and were completed by China Harbour Engineering Company under a project worth NAD 4 billion ($268 million).
This included the creation of 40 hectares of new land reclaimed from the bay within Namibian Ports Authority’s current port jurisdiction. The reclaimed land was linked to the existing port by a causeway.
The expanded terminal will have a capacity of at least 750,000 TEU per annum, compared to the previous capacity of 350,000 TEU. The project will not only provide increased container handling capacity in the Port of Walvis Bay, but will also increase the port’s bulk and break-bulk handling capacity by freeing up the existing container terminal to become a multi-purpose terminal.
The project added an additional 600 meters of quay wall in addition to a new passenger liner berth. There is also an option for the construction of an LNG export facility and a multi-purpose dry bulk terminal but these projects are currently on hold, according to the port authority.
At the weekend the Nigerian Ports Authority (NPA) declared that it needed another N50 billion to dredge the Calabar port.
The 64 kilometres Calabar port channel has consistently been very problematic for the NPA and a money- guzzler due to its high siltation level. It looks like there is no real solution on sight for the port to come to full life, but the amount of money which goes into dredging it every two years is alarming. The most painful thing about it all is that no dredging effort ever came to fruition.
The Calabar port is one of the five ports in the NPA eastern district demarcation. The other four are the Port Harcourt Port, the Warri Port, Koko Port and the Onne Port. Of these ports, only Onne Port, largely concessioned to Intels is functional at a reasonable capacity. The port in Warri and Koko are in a state of Comatose, while the one in Port Harcourt is currently having serious issues with its quay aprons, according an NPA source.
“We have serious issues relating to the quay aprons because they have deteriorated but we have commenced procurement process to ensure that the port is properly rehabilitated so that bigger vessels can come in,” the source disclosed.
Adams Jatto, general manager, Corporate and Strategic Communications, NPA admitted the decay in the eastern ports but said the authority had taken steps for rehabilitation of the collapsed quay apron and other facilities at the Port Harcourt port, Rivers State.
“On the shallow draft at Calabar, we want to revisit the entire procurement process because the problem is that we have to dredge Calabar and we are talking of about N50  billion to dredge it and we have to look at economic of scales so if we dredge to the required length, can we get vessels to come in there?,” Jatto asked.
This is the story of the giant of Africa, Nigeria, where “Lilliputian” Namibia soars. Going by the number of seaports in Namibia, a country as big as Nigeria should have over 160 seaports, but there are just only three! The Namibian story is apt for the Nigerian authorities to understand the country is too behind. For instance, there 360 commercial ports in the USA, which has a population of 327.2 million, placing the country on an average of about one million people per port.
Businessamlive Website Stats