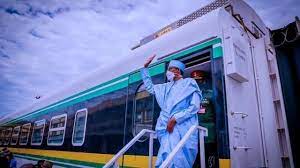 The Kano-Kaduna railway project is a part of the third and outstanding segment of the Lagos-Kano railway modernization project.
It would be recalled that, the first segment which is the Abuja-Kaduna Railway line, was flagged-off for commercial operation in July, 2016 and just recently, the second segment, Lagos-Ibadan railway line was commissioned for
commercial operation precisely on June 10, 2021.
Speaking during event, Rotimi Chibuike, minister of transportation stated that having delivered Abuja-Kaduna and Lagos-Ibadan railway project, that the remaining stretch of Ibadan-Kano which
traverses Oyo, Osun, Kwara, Niger, Abuja, Kaduna and Kano has been, segmented as follows: Kaduna-Kano segment. Ibadan-Minna segment and the Minna – Abuja segment
The scope of the railway project involves a 203km double track standard gauge railway from Kano to Kaduna. The railway along this route will traverse the major cities of Kaduna, Zaria and Kano with three three railway stations both for passenger and freight services at Rigachukun, Zaria and Kano with varying capacities and categories.
The minister stated that, the roject will link the federal capital, Abuja with the commercial city of Kano and also link the ongoing Kano – Maradi project with the outstanding addendum of Ibadan-Abuja that will link the Lagos sea ports to Maradi in the Niger Republic.
Amaechi expressed hope that the new project upon completion will greatly boost trade between the Nigeria and Niger republic  and foster economic development. He added that, the railway line will present an opportunity for Nigerians to traverse between Abuja and Kano via Kaduna with relative ease.
In the areas of social and economic development, the new Kano-Kaduna rail project will improve the standard of living of citizens within the corridor, create employment and promote trade.
In the long term, railway will help decongest the Lagos port complex and increase its efficiency as well as further increase the viability of the Inland dry ports located in Ibadan, Kaduna and Kano.
The rail line is also provided with accessories and special installations including power and water supply schemes, signalling systems & communication in GSM-R, freight yards, rolling stock depots and maintenance workshops.
Rotimi Amaechi disclosed that the ministry of transportation is finalizing plans to commence construction of the remaining addendum of Ibadan-Abuja to complete the entire stretch of the Lagos-Kano railway modernization project, the first of the modernization project in the 25-year strategic  vision plan of the federal government to revitalize the moribund railway transport subsector.
He assured that the federal ministry of transportation will continue to work assiduously in line with the President’s directives, to implement all the corridors within the Nigeria railway ‘modernization project and
progressively expand the railway network.
He noted that, the President administration has exhibited strong will in driving the overhaul of the nation’s railway system through President Buhari’s iintervention and support.
He assured that the ministry remains committed to the vision for a strong and sustainable railway transportation backbone to engender and facilitate a new path to positive economic transformation of the country.
The minister thanked the China Civil Engineering Construction Company (CCECC) Nigeria Limited, being the project contractor for their professionalism and astuteness in the construction of the railway infrastructure and TEAM Nigeria Limited for their supervisory role