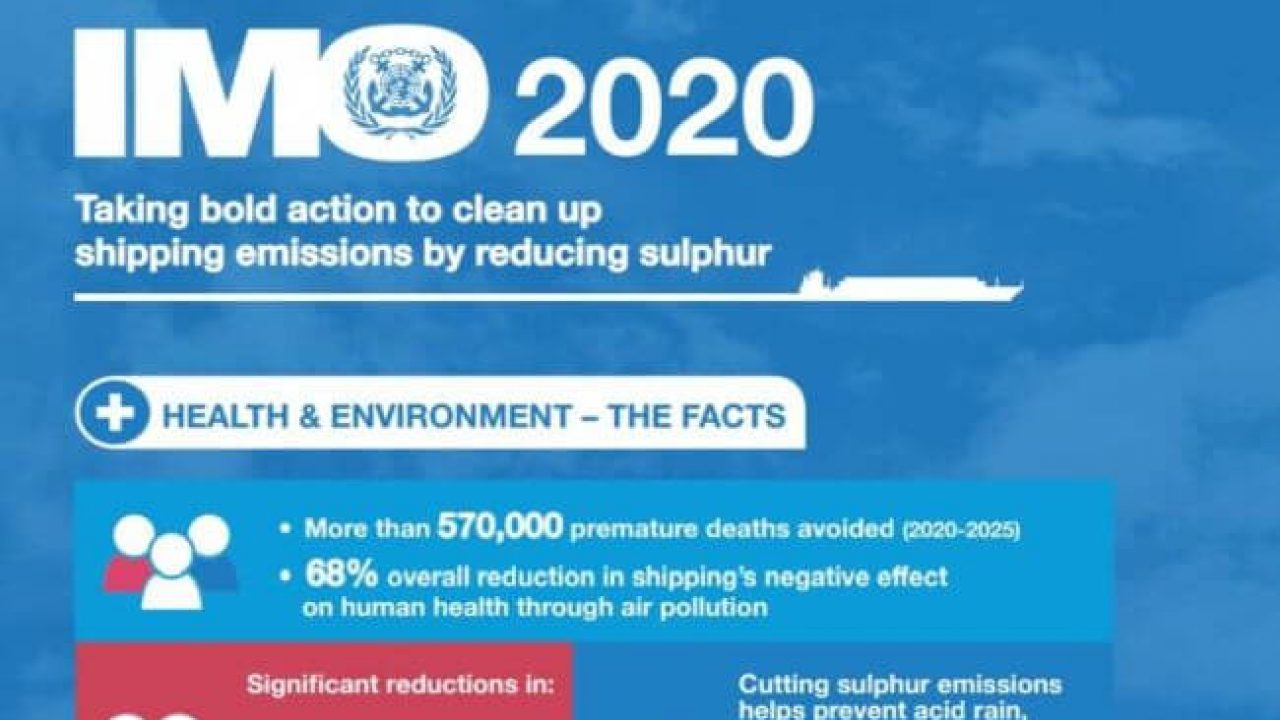 The new IMO rules prohibit ships from using fuels containing more than 0.5 per cent sulphur, compared with 3.5 per cent through the end of December, unless they are equipped with exhaust-cleaning scrubbers.

Scrubbers allow shippers to continue burning high-sulphur fuel oil, while releasing emissions into the water instead of air, which is permitted.

PwC Nigeria, in a report on the IMO rules on sulphur in fuel for shipping and the effect on Africa, noted that the driver of the change was the need to reduce the air pollution created in the shipping industry by reducing the sulphur content of the fuels being used by ships.

“The impact of the new regulations on Africa will be profound given the mix of lower and higher sulphur in oil production across the continent,” it said in the synopsis of the report.

The report, which was developed in partnership with Energex Partners and Downstream Advisors Inc, said the implications of the new regulations for refiners, shippers and other stakeholders in the industry would be far-reaching.

It said, “While marine fuels account for only about four per cent of global oil demand, the IMO’s regulations changing the quality of shipping fuel will have a global effect on oil prices. Indeed, the new rules potentially add billions of dollars of cost to Africa.

“The rising price of fuel for shipping will raise the delivered cost of imports and depress those of exports. As Africa is a significant importer of Automotive Gas Oil (diesel) and petrol, it has exposure to rising prices, resulting from the change in refining activity needed to meet the new regulations.”

According to the report, compared to the global average, there are generally less complex refineries in Africa.

“There are government subsidies for road-fuel; there is a higher dependence on imported fuels (which are expected to increase in price); and a higher proportion of power generation fed by high sulphur fuels. The challenges posed by the new regulations must be understood and prepared for by all those affected.”

Analysts have said the IMO 2020 regulations will put upward pressure on light sweet crude oil prices because of ‘increased demand’ for that crude oil in order to produce lower-sulphur marine fuels.

Analysts at McKinsey & Company said in a recent report that shifting bunker fuel demand from high-sulphur fuel oil to a combination of very-low-sulphur fuel oil and marine gasoil would increase overall oil demand in the short term while severely cutting demand for the HSFO.

“In turn, increased MGO or VLSFO demand by shipowners will increase crude runs by 250,000 barrels per day. As a result, all regions will experience higher refinery utilisation, pushing markets to simpler marginal configurations and higher margins in 2020. Cracking margins across regions will see a boost in 2020 due to increased growth in distillate demand.”

According to the report, with higher marine gasoil demand, the global refining market will be tighter for diesel and result in more excess petrol in the short term.

“There will be a higher premium for diesel from 2020 to 2022, as diesel–petrol spreads widen initially and then return to levels indicating a more balanced market after a few years,” it added.

Meanwhile, the most significant regulation for international shipping industry regarding air emissions is the upcoming IMO Global Sulphur Cap to reduce air pollution from ships. In October 2016 the International Maritime Organisation (IMO) agreed to “1St January 2020” as the effective date for implementation of the regulation by ships to comply with global 0.50 per cent m/m sulphur content of fuel oil requirement. IMO’s Marine Environment Protection Committee (MEPC) also adopted a resolution on the effective date for implementation of the fuel oil standard in regulation 14.1.3 of the International Convention for the Prevention of Pollution (MARPOL). The current standard is 3.5 per cent m/m (mass by mass) of sulphur (high sulphur fuel oil or HSFO), which has been in effect since January 01, 2012 and this will be lowered to a maximum of 0.5 per cent (very low sulphur fuel oil or VLSFO, mostly say LSFO). The new global limit will not change the limits in SOx (Sulphur oxides) Emission Control Areas (ECAs) established by IMO, which has been 0.10 per cent m/m since January 01, 2015.

While restrictions on sulphur emissions in shipping are not an entirely new concept, as emissions control areas in certain regions have long existed, the transition to the IMO 2020 rule is daunting. The majority of bunker demand will have to switch from high-sulfur fuel oil (HSFO) to VLSFO (0.5 per cent sulfur). The use of low sulfur fuel will be globally mandatory in 2020 unless alternative technology such as an Exhaust Gas Cleaning System (scrubber) is adopted. A scrubber is a system, which removes sulfur dioxide from the exhaust gas of ship engines with the help of atomising seawater.

The global consumption of fuel oil for large ships is currently roughly 6.0 million barrels per day (mb/d). As the demand for HSFO will decrease, there is a risk of overproduction of VLSFO which could lead to significant price swings. Fuels compliant with the 0.5 per cent limit are more expensive than the traditional high-sulfur bunkers.

The cap “is going to represent a significant change for refiners in Europe, because the switch for fuel oil from 3.5 per cent to 0.5 per cent is not straightforward,” says Damien Valdenaire, science executive, refining operations, Concawe, the environment research wing of FuelsEurope, the voice of the European petroleum refining industries. It is important to note that refineries are not the obligated party. “They don’t have to produce 0.5 per cent bunker fuel. It’s a strategic decision whether to produce it in limited quantities, or at all,” says Valdenaire.

In conjunction with fuel switching over from HSFO to VLSFO, exhaust gas cleaning systems – known as scrubbers – will be an important solution for compliance with IMO 2020. So demand for HSFO will be still there because vessels with scrubbers – retro-fitted exhaust cleaning technology – will still be allowed to consume HSFO. But only fewer than 1.0 per cent of the global fleet, will have scrubbers at the end of 2019, industry sources estimate. The Exhaust Gas Cleaning Systems Association or (EGCSA) reckons that around 4,000 ships will be fitted with scrubbers globally by January 01, 2020, though other estimates are lower.

The most momentous issue cited against scrubbers is their high upfront capital costs. Costs generally range between $2.0 million and $10 million per vessel. If a company such as Maersk Line were to outfit its roughly 300 vessels with scrubbers at an average cost of $5.0 million per vessel, this would amount to $1.5 billion. Some expect the adoption of scrubbers may attract ship’s chartering company. “The ship installed with scrubber technology, some charterers are likely to be willing to pay higher prices because it would allow them to burn a cheaper fuel, thereby trimming their operational costs,” says Engimeer Mahfuzul Karim, Technical Superintend, Mercantile Shipping Lines Ltd.

Total global bunker fuel demand kept steady year on year- including HSFO, LSFO and marine gasoil. In 2018, HSFO’s market share was estimated at around 60-70 per cent of the total, while MGO was about 20 per cent, according to various reports. The rest was LSFO and LNG. Due to global sulphur cap limit, HSFO demand will drop and the share of the each fuel will change, according to industry sources.

While VLSFO demand is expected to increase, supply of fuel oil is also likely to decline as refiners have been installing new cracking units. “VLSFO supply is not enough to cover all the bunker demand,” said a trader based in Singapore. Fuel oil production in Russia is likely to edge lower in 2019 as several new units come online at refineries. Russia is one of the major fuel oil suppliers to Singapore – the world’s largest bunkering port. Expectations are high at the Port of Fujairah, the key bunkering location in the Middle East, that the price of HSFO will decline sharply after 2020, while the price of LSFO/MGO will remain high.

Most ship-owners have already made a conscious choice regarding their bunker fuel choice post-2020. “It will be great challenge for small companies to exist in Maritime world from 2020. Miniature companies might suffer profoundly to comply with the regulations and this will escalate shipping cost at least 25 per cent more which will directly impact cargo transportation,” says Engineer Abu Taher, Technical Superintend, Mercantile Shipping Lines Ltd.

With the impending 2020 regulatory changes, many ship operators in Bangladesh (those who operate their ship globally), will have to switch to low sulphur fuel oil to ensure compliance with the new IMO sulphur emission limits. “We are fully ready to accept the new challenges and prepared all our ships accordingly. Bangladesh Shipping Corporation is committed to comply with the new IMO sulphur emission limit in order to save the environment by reducing air pollution from ships,” says Capt Jamal Hossain Talukdar, GM (SPD, DPA & CSO), Bangladesh Shipping Corporation.

Even at moderate estimates, the bills for ship owners will be very high, running into tens of billions of dollars extra a year for the sector. The question is: Can the shipping sector absorb these costs itself?