The Africa Pay TV market has risen significantly in the past few years, creating immense opportunities for programmers to generate significant revenue by broadening their content offerings using satellite broadcasting, one of the most reliable methods of content distribution. 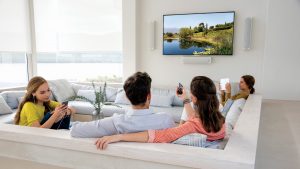 Intelsat, a multinational satellite services provider, stated this in its latest report on the African Pay TV market.

According to the report titled “Media Market Watch 2022: Africa report”, cable TV subscriptions in sub-Saharan Africa stood at $126 million in 2020 and is projected to reach $144 million in 2025.

On other sources of Pay TV subscriptions broadcast through satellite, the report noted that Direct to Home subscription stood at $2.2 billion in 2020, while Digital Terrestrial Television was $476 million in the same period under review. In its 2025 projections, the report predicted that Direct to Home subscription would surge towards $3.1 billion, while Digital Terrestrial Television is expected to reach $698 million.

On the overall, it stated that Pay TV subscription revenue potential for sub-Saharan Africa would record 43.5 percent annual growth rate across all services between 2020 to 2025.

The report also disclosed that there is an abundance of opportunity to provide broader content offerings across approximately 2,000 African languages.

Highlighting the opportunities and advantages satellite offers distributors in the region, the company noted that only 42 percent of the estimated 240 million sub-Saharan African households are connected to satellite television, creating a huge platform for programmers to exploit.

Further assessment of the market potential in the continent’s TV market showed that satellite broadcasting creates growth prospects in subscription and advertising revenue for content providers.

Citing a 2020 report conducted by Dataxis Intelligence, Intelsat noted that the total number of TV households in Africa stood around 100 million. Western Africa region was ranked the highest penetration zone with a total of 39.9 million TV audiences, followed by Southern Africa, Eastern Africa and Central Africa with a total of 25.5 million, 25.4 million and 9.4 million audiences, respectively.

Intelsat noted that while Over-the-Top (OTT) is slowly making its way to Africa, linear content distribution still retains the lion’s share of current and forecast revenue.

“Diverse content and reliable distribution are driving the Africa Pay TV Market and satellite is helping meet the needs of a younger, larger, more varied audience,” the report stated.