Zainab Ahmed, the minister of finance,  has stated that while the federal government borrows to deliver on its promises, it was also mindful of rising debt burden, which eats up about 25 per cent of the country’s annual earnings. Ahmed said this in an interview with the News Agency of Nigeria (NAN) on the side-line of the just concluded IMF/World Bank meetings, which took place in Washington DC. Nigeria currently has an external debt stock of about $24.27 billion as at December 31, 2018. 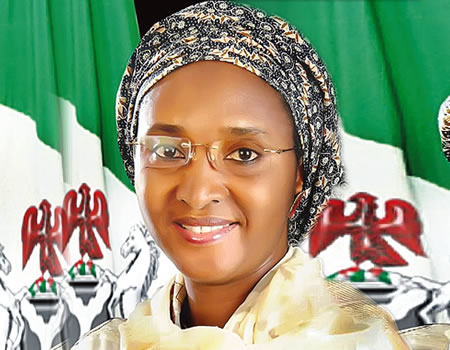 Euro bonds, loans from World Bank Group, China and Africa Development Bank Group make up over 80 per cent of the country’s debt stock. Ahmed insisted that in spite of warnings by the IMF and World Bank, the country was not in any way near a debt crisis. “The World Bank and IMF are cautioning us on the rate at which we are borrowing.
“They are also cautioning us on the need to build fiscal buffers because the global economy is going to be facing some risks and we agree with that. “We are very mindful of the level of our borrowings. Our borrowing is very much within fiscal limits right now.
“What we are doing is to increase our revenue generating capacity to make it easier for us to meet our debt obligations and our routine as well as capital expenditure,’’ she said.
NAN had raised concerns about whether the Chinese loans to finance the Idu-Kaduna, Lagos-Ibadan and Abuja light rail projects, the expansion of four airport terminals and some hydroelectric projects across the country were healthy for the nation’s economy. Concerns were also raised about whether the conditions for the loans were favourable to the overall interest of Nigeria.
Ahmed responded saying: “To borrow, we go through several processes of assessments as well as negotiations. “We make sure we get the best possible terms and whether we are borrowing from financial institutions or in Europe or China or anywhere else, we try to get the best rates of borrowing.
“So far, the conditions we’ve got are very good ones,’’ she said. Ahmed restated the commitment of the President Muhammadu Buhari-led administration to ensure that the country grows in a manner that would bring many people out of poverty.
According to her, it is for this reason that the government takes its social investment programmes like the school feeding, Conditional Cash Transfers to the poor and vulnerable and trader moni programme, very seriously.