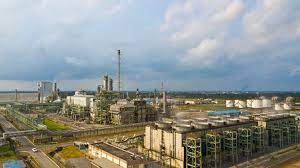 The company, whose Nigerian investment accretion would hit $6.4 billion by 2025, said this is clearly against recent claims in some quarters attempting to link it (Indorama) with black soot emission and environmental pollution in Port Harcourt metropolis, a menace that has caused untold health challenges in the oil city.
For both the petrochemical and the fertiliser plants (IEPL/IEFCL), the company is saying the soot link is completely false and unfounded.
There is an ongoing war by the Rivers State Government against black soot emitters and a clampdown on artisanal refiners of crude oil, popularly referred to as ‘kpo-fire’.
To prove its non-culpability, and exhibit its 24/7 precision engineering manufacturing facilities, Indorama took some media men to inspect its plants located on the Eleme industrial corridor, which houses several multi-billion-dollar industrial concerns. Some of the industries on the corridor include: the 210,000 bpd Port Harcourt Refining Company (PHRC), currently undergoing repairs at the cost of $1.5 billion; Notore Chemicals Ltd; Onne Oil & Gas Free Zone (OGFZ); several oil & gas servicing firms, among many others.
According to Jossy Nkwocha, head of corporate communications, their company operates a zero-soot manufacturing process system that is closely monitored in a state-of-the-art digital control room daily.
“Indorama (Nigeria) does not emit soot; neither does it waste its gases by flaring. We run a closed system; and this closed system does not allow any extraneous gas to escape. Officially, nobody has accused us of emitting soot, but some people are making insinuations here and there; and we have the responsibility to explain to the public to clear such insinuations so that the public is not misinformed in any way,” Nkwocha reiterated.
He said Nigeria used to import fertiliser worth about N7 billion yearly, but that today, the country is nearly a net-exporter of the product, with fertilisers coming from Indorama and other companies producing the product.
Dangote’s 3mtpa fertiliser plant in Lagos adds to the country’s production capacity. Indorama enjoys about 95 percent fertiliser market share in the country.
At the company’s premises, journalists saw that both the petrochemicals and fertiliser plants operate on a 24-hour-seven-day basis, running an environment-friendly operation that not only ensures the protection of the atmosphere, but also guarantees the safety of the workers and the host communities.
During the inspection, none of the fertiliser and petrochemical stacks was seen emitting soot.
“We maintain a four percent oxygen system, which is well above the two percent for complete combustion to take place during the production process, as recommended by the Federal Government of Nigeria,” explained an engineer tour guide.
He said this was the secret behind their zero-soot emission.
He stated that it is the incomplete combustion (carried out mainly by artisanal refiners in the state) that brings about black soot, which also constitutes a waste of essential resources.
Additionally, Indorama Nigeria buys its natural gas resource from Agip Nigeria Ltd (NAOC) or TotalEnergies Nigeria Ltd. The presence of adequate gas supply to the multibillion-dollar plants side-steps wastages, and ensures complete combustion during the conversion process.
At the petrochemicals production, the presence of natural gas during combustion converts the resource into polyolefins and other products highly sought in plastic making.
To date, Indorama Nigeria is West Africa’s largest producer of polyolefins and the second largest in sub-Saharan Africa. The company has a workforce of about 7,000, and remains to date, the major supplier of fertiliser to about 32 million Nigerian farmers, making it a major contributor to the nation’s economy.
“We also supply Urea to blending plants. Those blending plants, with each of them employing between 50 to 100 persons. Indorama is helping to create jobs,” Nkwocha said.
However, Nigeria is yet to scratch its global petrochemicals advantage. The country sits on more than $20 billion petrochemicals capacity, with only one plant, which is less than 10 percent of its petrochemicals potential.
The African economic giant is losing over $10 billion annually by its failure to develop its petrochemicals sector.
Nigeria’s peers in this regard: UAE, Qatar, Iran, and others are attracting more than $90 billion investment in petrochemicals. All of these countries have several petrochemicals plants in their domains.