Oil-rich Rivers State, says it is not borrowing any money from financial institutions, locally or offshore, to finance its multi-billion-dollar projects since 2015.
Rivers, with an estimated $30 billion GDP size, is Nigeria’s second highest revenue earning sub-national, coming only behind Akwa Ibom, a fellow oil-rich state. But it (Rivers) has a bigger economy than the former. It is home to some of Nigeria’s multi-billion-dollar oil & gas facilities, including the incoming $7 billion LNG Train 7 in Bonny Island. 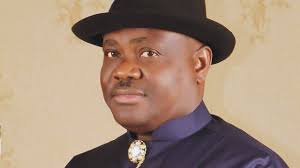 State Governor, Nyesom Wike declared that his administration takes great care in executing its several development projects to completion stage without being indebted to any financial institution.

To date, the Wike administration has inaugurated projects whose costs roughly total in excess of $3 billion. Additionally, he received a refund of N78.9 billion from the Federal Government in 2020 as pay-out for executing federal roads in the state. The refund threw the state’s political gladiators who are bitterly divided along party lines, into a heated frenzy. The main opposition party, All Progressives Congress (APC) claimed it actually worked for the money – and should be acknowledged by the ruling People’s Democratic Party (PDP). But the latter adduced that the cash came from the state’s coffers – not the party’s.
Some of the key projects include: nine flyover bridges finished or ongoing; several other roads, hospitals, schools, a cassava processing plant, among others. On its part, the APC accused Wike’s PDP government of engaging in “impressionistic projects” with no direct economic benefits in terms of jobs creation for millions of the state’s over 1.8 million unemployed.
Speaking at the flag-off of construction of the Trans-Kalabari Road Phase 1 in Degema Local Government Area, Governor Wike reminded the people that even the Governor of Central Bank of Nigeria (CBN), Godwin Emefiele, has attested to the position of the state’s non-indebtedness to any financial institution.
“I am not borrowing money. It is a matter of how you manage the resources of the people.
I’m not owing any bank. I challenge any bank to say the Rivers State government is indebted to them. The only money we took for agriculture, which the Central Bank of Nigerian gave us, is N5 billion. As I speak, we have not touched one Naira. The money is still in there,” Wike said.
However, the oil-rich state also earns heftily from internal revenue sources – in excess of N20 billion monthly. In 2019, the state had an internally generated revenue (IGR) target of N120.49 billion. In Q3 of 2018, the NBS figures put the state as second highest IGR earner with N22 billion after Lagos’ N87.06 billion.
The Trans-Kalabari Road is connecting Krakrama, Omekwe-ama, Angula-ama, Mina-ama and other communities in the Kalabari area. The road was begun by the immediate past Amaechi administration in 2009, but could not finish it up. Due to what Governor Wike described as “weak payment module that clearly showed its lack of interest in either constructing or completing the Trans-Kalabari Road that it awarded then.”
Phase one of the project will be completed in 2022, with the contractor collecting N1 billion monthly via an irrevocable standing order. The N1 billion is taken from the state’s IGR account every month and given to the contractor to do the project.
Rivers commissioner of works, Elloka Tasie-Amadi, said the Trans-Kalabari Road Phase 1 is a 13.599 km road project, with one bridge, and will connect several island communities to the mainland of the State via the existing Buguma/Degema/Abonemma Road.
Businessamlive Website Stats