Saudi Arabia’s oil giant Aramco is assessing setting the final offer price of its initial public offering at the top of the indicative range, which would raise $25.6 billion and surpass the current record for the biggest IPO ever, Bloomberg reported on Wednesday, quoting people familiar with the discussions – per Tsvetana Paraskova of oilprice.com 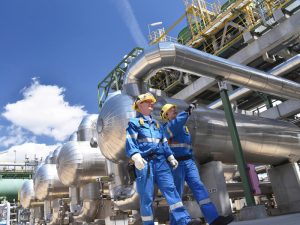 Aramco has set an indicative price range of 30-32 Saudi riyals, ($8-8.52), per share, in its long-awaited IPO. The upper end of the pricing range would give the company a total value of some $1.7 trillion.

Saudi Arabia aims to raise more than $25 billion from selling 1.5 percent in its crown jewel. If Aramco does price the shares at the top end of the range, it would generate $25.6 billion from the IPO, beating the $25-billion IPO of Alibaba on the New York Stock Exchange in 2014.

According to Bloomberg’s sources, many Saudi fund managers have placed orders at the top end of Aramco’s indicative range, expecting strong local demand to push the pricing to the highest level.

The institutional subscription periods ends on December 4, and Aramco is set to announce the final offer price of the IPO on Thursday, December 5, according to its IPO prospectus.

As of last Friday, Saudi Aramco had attracted total bids of $44.3 billion for its initial public offering—or 1.7 times the money the Kingdom hopes to raise.

Saudi Arabia will be offering up to 0.5 percent in Aramco to retail investors, while in total the Kingdom plans to list 1.5 percent of the company on the Saudi stock exchange, the Tadawul.

The retail portion of the IPO, which ended last week, was oversubscribed nearly 1.5 times, with $12.64 billion in orders placed.

The institutional portion was nearly 3 times oversubscribed with orders totaling $50.4 billion one day before the deadline on Wednesday, the financial advisers of the IPO told Reuters on Tuesday.