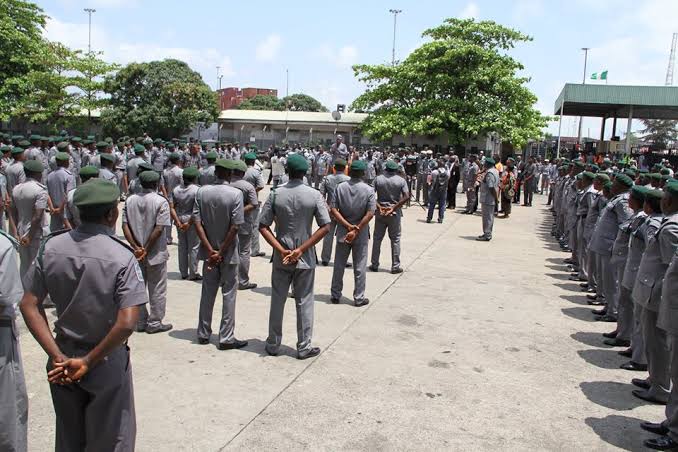 By Samson Echenim
The Senate committee on Customs has cried out over a whopping N1.6 billion spent by the Nigeria Customs Service to recruit 3,200 men of the service.
Hameed Ali, comptroller-general of Customs is currently recruiting 3,200 people after allegedly sacking about half of the workforce since he took over the management of the trade regulatory agency in 2015.
NCS has shortlisted 162,399 for screening out of 828,333 representing 19.5 percent of those who applied for the Customs job.
This is as the Nigeria Customs Service says the figure quoted by the Senate committee was misleading, without necessarily giving a different figure, as it said it is spending N1,570,769,000. The figure was obviously rightly  approximated by the Senate to be N1.6 billion.
Francis Fadahunsi, vice chairman, Senate Committee on Customs, also said in an interview with Punch that Ali’s management of the Customs Service smacks of incompetence and fraud and called on the federal government to relieve him of his position before he runs the Customs aground.
“The CG wants to recruit 3,200 persons and he paid N1.6 billion to a consultant to recruit 3,200 persons. The money is not for training but to just recruit them.
“I asked him if the Nigerian army ever used consultants to recruit personnel and he said no. He said Customs officers are corrupt and he is bringing in a consultant to recruit 3,200 persons and he will pay the firm N1.6 billion.
“Are you recruiting five million people? The N1.6 billion is even in the budget and that is one of the reasons the budget was being queried by the leadership of the Senate,” Fadahunsi said in the interview.
The vice chairman of the Senate committee on Customs also alleged huge fraud taking place at the Customs headquarters, while insisting that the CG is incompetent and unable to manage human resources and trade facilitation.
He said, “This man (Ali) met more than 30,000 personnel in the Nigeria Customs Service (NCS), and today they are not more than 15,000 left, he has sacked all of them.
“If you see the fraud in the Customs now, you will be shocked, but nobody must talk. They make noise to cover this up, but if you go into their books, you will be surprised.
“Customs headquarters was awarded for N2.7 billion then, but today the project is going to about N30 billion.
“The project has not been completed but the furniture contract for the uncompleted building has been awarded. Who is fooling who? If Mr. President sees what the man is doing, he will run out of the country.
“That is why I am saying that Mr. President should put a technical person from Customs there; if not, the man will run the place aground.”
Reacting, Customs spokesman, Joseph Attah said the N1.6 billion quoted for recruitment of 3,200 people into the Nigeria  Customs Service by the Senate was without the details captured in the budget and therefore, “misleading.”
He said, “For clarity, the correct figure is N1,570, 769,000. This covers recruitment process which is N300,000, 000, feeding 0f 3,200 put at N2000 each, daily for six months amounting to N1, 152,000,000.
“Then Logistics, training kits and teaching allowances all carefully calculated to arrive at the N1,570,769,000. It is therefore wrong to attribute the sum to only the recruitment excluding the bigger picture of 6 months training period.”
On the issue of NCS new headquarters, Attah said variations of the contract that was awarded in 2006 could only be “a consequence of changes in the prices of items within a period spanning over a decade.”
Businessamlive Website Stats