Seplat Petroleum Development Company Limited has emerged the overall winner of the 2019 Pearl Awards, a standing initiative designed to celebrate excellence and leadership in the Nigerian capital market. 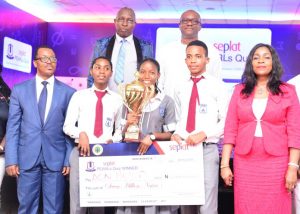 As the defending champion of the recognition, the energy company achieved the feat of emerging the “PEARL” winner for the second time in a row.

The event held recently was attended by regulators, leaders, players and other stakeholders in the Nigerian capital market space.

Olufemi Lijadu, the chairman of the board of the Securities and Exchange Commission, (SEC), and  Mary Uduk, the  acting director-general of SEC, supported by Farouk Umar, chairman of the PEARL Awards Board jointly provided the award to the SEPLAT management.

Apart from winning the overall PEARL Awards for 2019, the company also clinched the sectoral awards for the Oil and Gas segment and that of the net asset ratio.

Umar, the chairman of the board of Pearl Awards, believed that the awards was an avenue for encouraging development of the capital market.

Tayo Orekoya, president of Pearl Awards, speaking on the theme of the 2019 edition “Celebrating Sustainable Leadership & Resilience” said the event was recognizing leaders who represent beacons of hope for the capital market.

Orekoya said that on the threshold of a quarter of a century celebrations, PEARL awards has recognized and rewarded over 85 quoted Nigerian companies for outstanding operational and stock performance with 18 emerging as the overall highest awards winners of the stock market at different times.

According to him “The PEARL Awards remains the only Awards in Nigeria that rewards outstanding performance of quoted companies in the Nigerian capital market based on verifiable facts and figures.

“We remain humbled that our impartiality, transparency, fairness and unbias have continued to endear us to major stakeholders in the capital market. We commit to uphold and be sustainably guided by these principles”.

Orekoya added that the PEARL Awards will expand its scope to cover the fixed income securities, derivatives and registrars space.

He also disclosed that the board was working out modalities for establishing the “African” version by 2021.

The Acting Director-General of the Securities and Exchange Commission Ms Uduk commended the PEARL Awards team for its legacy of driving excellence and competitiveness in the capital market.

She assured stakeholders of the continued support of the apex regulator for efforts towards rewarding hardwork, dedication, ingenuity and excellence in the capital market.

In the same vein, Chairman of the Board of SEC Nigeria  Lijadu, praised the PEARL Awards for evolving for over two (2) decades and remaining consistent in its drive to support the growth of the capital market.

Dr Abiodun Adedipe, an economist and board member of PEARL Awards in the presentation of the “Nigerian Stock Market Annual” 2020 edition noted that a key take away from the report was that Nigeria and West Africa remained key destinations for attracting private equity and even venture capital investments.

He noted from the report that the government should explore catalyzing the growth of the commodities exchange market to help diversify the economy and give it revenue earnings.