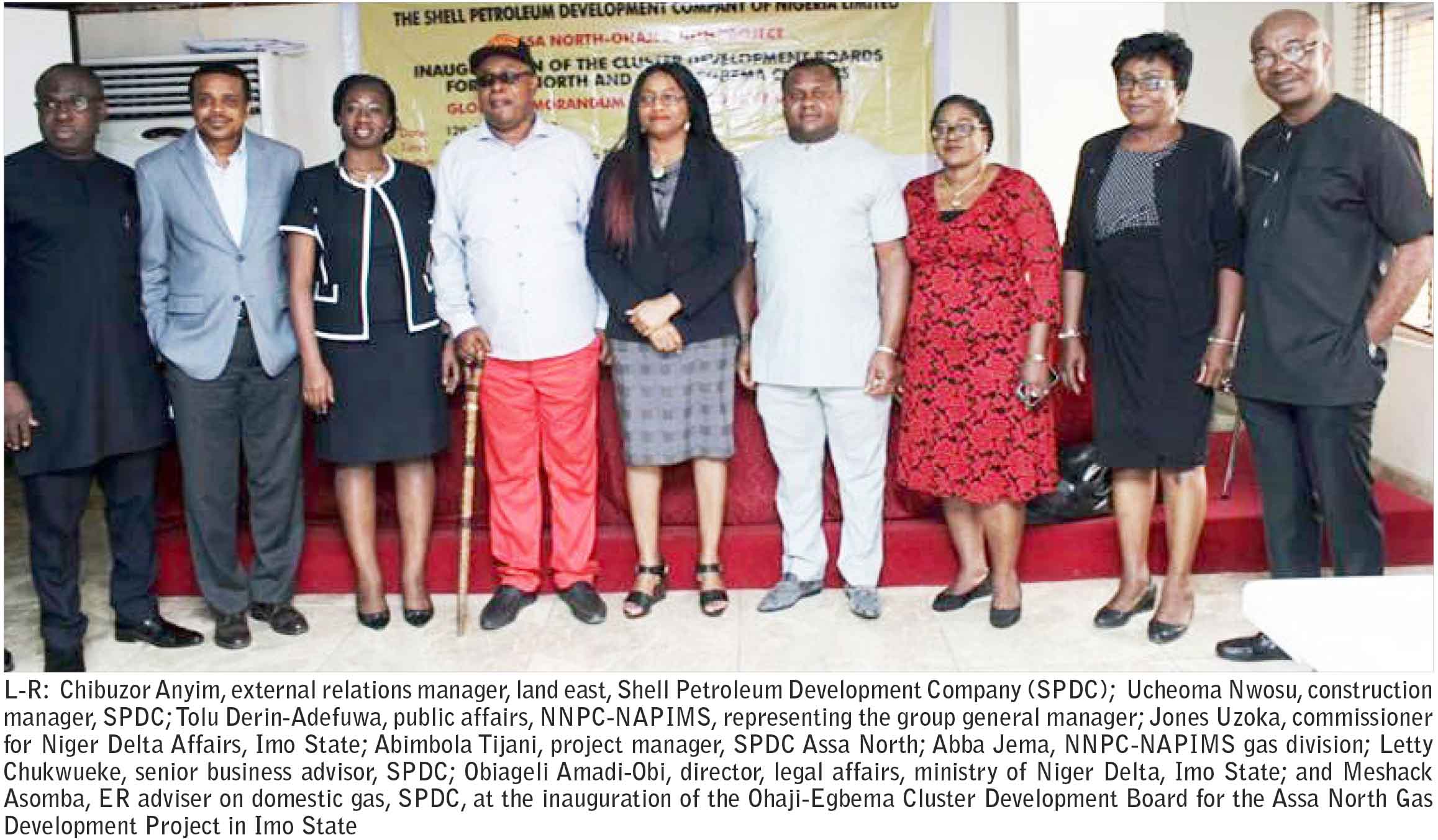 The event, which held in Owerri, the Imo capital, was led by Jones Uzoka, the state commissioner for Niger Delta Affairs along with senior officials from Shell, National Petroleum Investment and Management Services (NAPIMS) and CDB members from the project’s 11 host communities.
Igo Weli, Shell’s general manager, external relations, said the inauguration of the CDBs came after a series of structured discussions and negotiations with all stakeholders to the Assa North Gas development project.
business a.m. understands that Shell began due diligence on the Assa North (Ohaji-Egbema LGA) gas project in 2012. The vast area lies in the womb of Imo’s huge gas deposits.
Checks by business a.m. indicate that Imo, an eastern heartland state, with an estimated gross domestic product (GDP) economy of $18 billion holds gas deposits in excess of 7.8 trillion cubic feet (tscf), which can be found in Oguta, Ohaji-Egbema, parts of Izombe and Owerri Municipal.
The CDBs will use the Shell Petroleum Development Company (SPDC)’s award-winning Global Memorandum of Understanding (GMoU), which is a community-led sustainable development and interface management model that puts the communities in the driving seat in setting development priorities and implementation of programmes and projects to meet their needs.
The Ohaji Egbema Cluster Development Board, along with the soon-to-be inaugurated Assa North CDB, will manage a N1 billion fund for community development over the next five years under the Assa North Gas Development project.
Weli, who was represented by Chibuzor Anyim, said the CDBs are made up of principal officers of the Community Trusts from the 11 communities of the Assa North Gas development project, and would have the responsibility for implementing a Global Memorandum of Understanding (GMOU) established for the project.
The Anglo-Dutch oil giant recently made a Final Investment Decision (FID) on the estimated $3.6 billion gas project. This was followed by signing of a Global Memorandum of Understanding (GMOU) with the project’s host communities in Ohaji-Egbema local government area of Imo State, with huge gas deposits.
The cluster development boards members that were inaugurated by Uzoka were drawn from Avu, Umuapu, Obitti, Ohoba and Obosima. The CDBs were earlier led to swear an oath of commitment to effective implementation by Obiageli Amadi-Obi, director of legal affairs in the ministry.
Weli said the GMOU is a proven wining approach developed in 2006 by SPDC Joint Venture (JV) partners (made up of NNPC, Shell, Total, and NAOC) adopted across the oil company’s operational areas.
He said it is a community-led sustainable development interface management model that puts the communities in the driving seat in setting development priorities and implantation of programs and projects to meet their needs.
He charged the officials of the CDB to utilise this opportunity of the project funding to bring the much-desired socio-economic development to their people.
He said SPDC JV has ensured that the project has deliberate Nigerian and Community Content Strategy in its operations, creating vast opportunities for Nigerian firms in Engineering, Procurement and Construction contracts; immense employment and sub-contracting opportunities for workers and local contractors in the project area; as well as opportunities for capacity development initiatives, knowledge transfer and human capital development.
The Shell external relations head said the Assa North Gas project emphasizes Shell’s unshaken commitment to Nigeria both now and in the future, and would continue to explore other areas of support for the expansion of domestic gas supply, continue to make investments under the right conditions.
He said the Assa North Gas project would be a major game-changer in Nigeria’s quest for energy sufficiency and economic growth.
Meanwhile, Uzoka, who heads the Imo State ministry of Niger Delta Affairs, charged the Assa gas project host communities to exhibit cooperation, commitment and honesty in implanting the GMOU, so as to bring about great economic transformation of the areas.
Also, the group general manager (GGM) NNPC’s National Petroleum Investment and Management Services (NAPIMS), Roland Ewubare, represented by Tolu Adefuwa-Derin, said the inauguration of the CDB is an opportunity for the people to grow their own communities.
He asked the CDB officials to be committed to the Assa North Gas Development Project with the target to count successful projects concluded in their community within the next five years.