Nigerian shippers and freight forwarders have called on the federal government to stop the Nigerian Ports Authority (NPA) from dismantling the Secure Anchorage Area (SAA) operated by OMS Limited, which provides security to ships coming to the Apapa and Tin Can Island ports in Lagos. 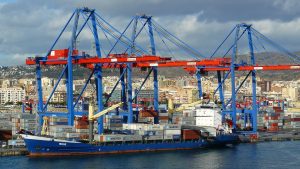 They said contrary to claims that the SAA is leading to increase in cost of shipping, security of ships at the SAA by the Nigerian Navy, using platforms provided by Ocean Marine Services (OMS) Limited is helping multinational shipping lines to save a whopping $225,000 on one journey to Lagos ports.

The concerned shipping and ports services users who spoke to journalists through Uche Increase, national president of the National Association of Government Approved Freight Forwarders (NAGAFF) said they were baffled that the NPA, which was part of a tripartite committee on maritime security, that created the SAA in 2014 is now wanting to dismantle the facility, where ships coming to Lagos ports are well secured.

Increase, who leads the largest association of international trade experts in Nigeria, said it had become very necessary for the shippers and freight forwarders who use the services of the multinational shipping lines to speak up and resist the dissolution of the SAA.

He said, “If we do not add our voice to clarify the facts at this point, the government may be misled and the country will be worse off as far as maritime security is concerned. We do not want this SAA to be disrupted so as not to expose our cargoes to the risk due to hijacking of ships and kidnapping of crew. If the SAA is disrupted, ships will now again, begin to go to neighboring ports of Cotonou, Togo and Ghana. We don’t want to go back to the old order. We are asking the federal government to look critically on this issue so that the SAA is not dismantled.

“We understand that the SAA is a child of circumstance created after a steering committee set up in 2013, by the Nigerian Navy, NPA, Nigerian Maritime Administration and Safety Agency (NIMASA), Department of Petroleum Resources (DPR) and other agencies of government that are stakeholders in the maritime environment.

“At that time, we knew that the committee held meetings for over five months to address the issues of security for ships the Lagos waters. There were critical issues at that time which included illegal arms importation, piracy, and robbery at sea, which were making Nigeria waters to be given the designation of “High Risk Area” (HRA) by International Maritime Bureau (IMB). Those meetings led to the creation of the SAA among other demarcation on the water for ships who wish to anchor there while waiting to berth at the ports.

He insisted that the SAA was a far cheaper and safe way to manage security for ships coming into the country as the vessels used to carry mercenaries onboard to provide the security when coming to Nigeria at a very exorbitant cost.

He explained, “Before the establishment of the SAA, vessels coming to Lagos would carry mercenaries onboard, to provide security for them. One of such mercenaries would cost $2,500 and a ship would carry three for a period not less than 30 days. That costs as much as $225,000 and even more, when the mercenaries have to be onboard for more than a month.

“As freight forwarders we are major port users of shipping services, moving cargoes across seas from to Nigeria. We are comfortable with the service and we urge the Federal Government to let the SAA be so that the multinational shipping lines can continue to patronise our seaports.

“What we see here in this issue between OMS and NPA as a major is there is need to deepen capacity to see that maritime agencies continue to work in synergy. If the whole parties bringing the SAA have not come to dissolve it, then for one of the agencies to want to dismantle it, may be seen as creating undue problems.

“OMS should be allowed to provide its services as it currently does with the navy at the SAA. The NPA should continue its security services too as there is also a general Anchorage for vessels who wish to use it. They all mean well for the nation.

The NAGAFF boss who is also a member of the Governing Council, Council for the Regulation of Freight Forwarders in Nigeria (CRFFN) explained that while he was not speaking for OMS, the company is not using Nigeria Navy boats, but provided the security boats, the platforms and logistics to the Navy to provide security to the ships who wait for berthing at the SAA.

He continued, “The boats are bought by the company completely and they are even registered with NIMASA because you can’t bring in any boat or operate them without NIMASA’s approval and paying their dues and tax. The NPA is just one of the agencies that created the SAA, so why does it want to dismantle the facility alone? We appeal to the NPA to see reasons to rescind its reported decision to dismantle the SAA.

“We the concerned shipping and ports services users want to advise the Nigerian government that this arrangement should be retained and all agencies of government in the maritime environment should continue to support the arrangement. Today, NIMASA, the Navy, and even the DPR and the NPA itself and other maritime stakeholders are comfortable because of the good effects of the SAA on security of ships coming to Lagos ports.