Over time, online shopping has gradually witnessed an increase in alternative shopping habits like social commerce. The global social commerce market is estimated to grow to $604.5 billion by 2027, while also rising at 31.4 percent compound annual growth rate (CAGR) between 2020 and 2027. 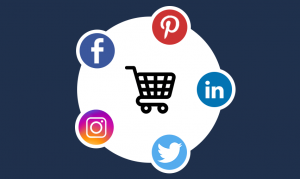 Similarly, it is estimated that China’s social commerce market would grow at a 30.5 percent CAGR over the analysis period. E-marketer predicted an estimation of 357.2 million social buyers by end of 2020.

The figure will spiral to 392.2 million, 420 million and 446.8 million by 2021, 2022, and 2023 respectively, while China is to account for 37.9 percent of social media worldwide at the end of the period. According to Statista, there is the tendency of witnessing an increment in the number of social commerce users as its 2020 estimate is 713 million.

China surpasses the US in social commerce. The 2019, e-marketer reported $186.04 billion as the sector’s total sales, which was close to ten times the US total of $19.42 billion.

Since 2017, when it launched Mini Programmes, Tencent’s WeChat has been at the forefront of the trend as it witnesses major online retailers to create Mini Programmes to make direct sales within the app.

The 2019 annual report has it that Tencent generated over $115 billion in total transaction volume from its Mini Programmes.

Also, Statista projects that the figure could be as high as $84.2 billion by 2024, accounting for 7.8 percent of retail eCommerce sales in the US.

In the US, top-ranking companies like Walmart and Facebook seem to be taking cues. Walmart, in August 2020, announced its intention to buy a 7.5 percent stake in TikTok. The CEO noted that the move was based on the visualization for huge business opportunities in social media.

In 2018, Duoyin, the Chinese version of TikTok, partnered with Alibaba to introduce a shopping feature on the app and refined its offering to include product search features and native storefronts.

By August 2020, Duoyin emerged as the country’s most popular platform for shoppable videos with 600 million daily active users and 22 million creators who realized over $6.15 billion over the year.

Duoyin, in 2020 announced its plan to invest traffic resources worth $1.5 billion in order to generate $11.8 billion in income for creators.

However, the competition became stiff as the main rival, Kuaishou, announced a total of 500 million eCommerce orders in August 2020; while daily active users grew around 300 million at the time.

Similar to Taobao Live on Facebook Shop, Facebook introduced a live shopping experience that serves as a dedicated section for eCommerce within the app, hence making it easy for businesses to go live and feature their products.

During the pandemic, Taobao recorded impressive growth as the number of streaming events on the platform increased by a whopping 110 percent in February 2020. The platform posted during the first quarter of 2020 a sales increase of 88 percent year-over-year.

UBA pose a stellar performance in 2020 with 27.7% growth in profit to N113.7bn due to growing equity holders’ fund