Production of gold by South African mines retreated the most in six years in December as a strike at the nation’s top producer of the metal continued. 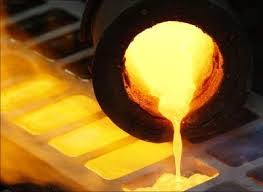 Gold output declined 31 percent from a year earlier, compared with a revised 14 percent drop in November, Pretoria-based Statistics South Africa said in a statement on its website Thursday.
This represents a 15th straight month of declines in production. South Africa used to be the world’s top producer of the metal but deeper ore bodies, labor strife, high costs and policy uncertainty have crimped output.
Sibanye Gold Ltd. said earlier this week that it was considering shutting unprofitable shafts and cutting jobs at its operations for the metal amid a three-month-old wage strike that’s curbing output. The company plans to cut more than 6,000 jobs, it said today.
Total mining output declined 4.8 percent from a year earlier, the statistics agency said.
Production of platinum-group metals increased 6.1 percent from a year earlier, it said. This is a fourth straight month of gains, the longest such streak since 2016.