The U.S. central bank left rates unchanged at the end of its two-day June policy meeting on Wednesday, but pledged to “act as appropriate” to sustain economic health. 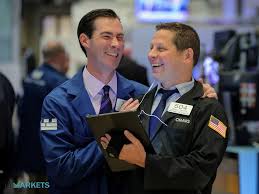 Wall Street’s main indexes have gained in recent weeks on expectations of a rate cut and hopes of a revival of trade talks between the United States and China.
The benchmark S&P 500 index, which has risen 7.4% so far in June and is on track to recoup its previous month’s losses, hit an intraday record high of 2,956.20 on Thursday.
“Chairman Jerome Powell’s comments that ‘the case for additional accommodation has strengthened’ was exactly what market participants wanted to hear,” said Robert Johnson, chief executive officer at Economic Index Associates in New York.
“A continued trade war with China could be the catalyst that sends the U.S. economy into recession and rates cuts can be viewed as preemptive strikes by the Fed to prevent that from happening.”
Financial stocks were flat, while the energy index jumped 1.98%, the most among all 11 major S&P sectors, as oil prices surged over 3% on renewed tensions in the Middle East after Iran shot down a U.S. military drone.
At 9:53 a.m. ET, the Dow Jones Industrial Average was up 241.66 points, or 0.91%, at 26,745.66 and the S&P 500 was up 28.07 points, or 0.96%, at 2,954.53.
The Nasdaq Composite was up 91.66 points, or 1.15%, at 8,078.98.
The technology sector rose 1.57%, boosting the S&P 500 by the most, with large-cap favorites Microsoft Corp and Apple Inc leading the charge.
Also helping tech stocks was Oracle Corp, which jumped 8.15%, after the business software maker forecast current-quarter profit above estimates.
Boeing Co gained 1.01% after the planemaker said it is in talks with other airlines for sales of its 737 MAX after receiving a letter of intent for 200 of the grounded planes from British Airways owner IAG.
Cruise operator Carnival Corp slid 9.77%, the most among S&P companies, after cutting its profit forecast for the year on the Trump administration’s sudden ban on cruises to Cuba and expected lower ticket prices in the coming months.
Rivals Royal Caribbean Cruises Ltd and Norwegian Cruise Line Holdings Ltd dropped more than 2% each.
Buoying sentiment further was data which showed the number of Americans filing applications for unemployment benefits fell more than expected last week, pointing to underlying labor market strength despite a sharp slowdown in job growth in May.
Advancing issues outnumbered decliners by a 6.14-to-1 ratio on the NYSE and by a 3.14-to-1 ratio on the Nasdaq.
The S&P index recorded 92 new 52-week highs and two new lows, while the Nasdaq recorded 99 new highs and 16 new lows.