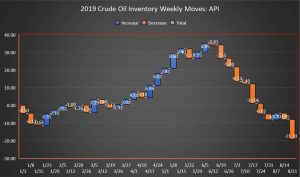 The American Petroleum Institute (API) has estimated a staggering crude oil inventory draw of 11.1 million barrels for the week ending Aug 22, compared to analyst expectations of a 2.112-million barrel draw, according to this sourced oilprice report.

After Tuesday’s inventory move, the net draw for the year is 19.08 million barrels for the 35-week reporting period so far, using API data.

Oil prices were trading up on Tuesday prior to the data release despite the appearance that the United States could be softening its stance on the Iranian nuclear deal and the subsequent oil exports that would be unleashed on the market in the rather unlikely event that the Iran vs. the West showdown wrap up in quick form. It also ignored news from China that it would seek to increase its domestic demand for products to weather the tariffs imposed by US strong-arming, indicating China’s future unwillingness to give up ground in the trade talks.

US crude oil production as estimated by the Energy Information Administration showed that production for the week ending August 15 stayed the same at 12.3 million bpd, just 100,000 bpd off the all-time high of 12.4 million bpd.

The U.S. Energy Information Administration report on crude oil inventories is due to be released at its regularly scheduled time on Wednesday (today) at 10:30a.m. EST.