Agriculture effectively sustained Nigeria’s early post-colonial economy and financed most of its bequeathed legacy institutions and projects. The enormous developmental challenges of that era and the responsibility of each region to manage its expenditure deepened the entrepreneurial capacities of those foundational leaders to finance their fiscal programmes from their naturally endowed resources. Cocoa and rubber financed the economy of the Western region, while groundnut and cotton sustained the Northern region’s economy. Revenue from palm oil supported the economy of the Eastern region. Fiscal managers of the regional economies knew how critical it was to drive for independent revenue expansion doggedly. Without the generosity of crude oil resources and mounting debts that are unfortunately the bedrock of today’s fiscal programming, the subnational governments could create and sustain laudable projects and programmes. The Western region leveraged resources from cocoa and rubber to finance free education and infrastructure. Some of the legacy accomplishments of that era include the Cocoa House at Ibadan, Western Nigeria Television, which later became the Nigerian Television Authority, Liberty Stadium, which was the first of such infrastructure in Nigeria and Africa, and Obafemi Awolowo University. 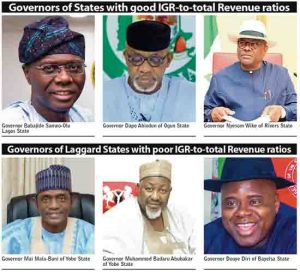 The primary revenue source for the Northern region was groundnuts, majorly from Kano, and cotton. On the back of these primary sector endowments, the post-independent economic managers initiated secondary sector advancements, including the building of textile and groundnut oil mills. Some of their significant legacies include the Kainji Hydroelectric Dam, Northern Nigeria Development Corporation, the Ahmadu Bello University in Zaria, and the Bank of the North. The Eastern region embarked on aggressive structural and fiscal diversification. They optimized taxes from agricultural production to finance such projects as the Nkalagu cement factory, Trans Amadi Industrial Complex in Port Harcourt, Nigerian Breweries’ stout factory at Aba, the Obudu Cattle Ranch and Resort, and the University of Nigeria, to mention a few.

Subnational governments’ independent revenue generation stamina and direction during the early post-colonial period were well defined and guaranteed to lead to sustainable prosperity for the country. They also designed and committed to long-term economic development planning that should be the natural bulwark of such ambition. Unfortunately, the discovery of oil provided a misleading picture of the early arrival at the destination of the hitherto dreamt-of prosperity. Consequently, the independent revenue-generating stamina and sustainable development momentum asphyxiated and died. We afterwards fell into the vicious swamp of the oil resource curse.

Since then, a lot has changed. Governors no longer showed the required enthusiasm and responsibility to work out the prosperity and development of their states by dint of their enterprise. On the contrary, they rely on monthly shared envelopes from Abuja. Sadly, many do not deploy their government’s share of the statutory allocations to build structures for generating significant independent revenue progressively. Unfortunately, this dependency mode contrasts with the burgeoning citizens’ expectations consistent with the twenty-first-century governments. In short, our rapidly growing citizen population wants an authentically prosperous country showcasing a sufficient array of relevant and high-quality public goods suffused with a prevailing rule of law environment. It is undebatable that the complexity of these demands cannot be satisfied by putting hope in the monthly Federation Accounts Allocation Committee (FAAC) allocations. The colossal size and the executive lifestyle attending to the democratic system of governance places a massive financing burden on states and local governments that naturally begs for enhanced innovation in IGR expansion and overall fiscal performance. Organisational structures at the state and the local government levels parade a pantheon of executive offices with expansive financing demands on each.

On average, 80 percent of most state governments’ revenue in Nigeria is from the FAAC, powered by income receipts from fossil fuel exploration. A few exceptions are Lagos, Ogun, and Rivers State, with 64%, 47%, and 43% IGR-to-total revenue ratios, respectively, as of 2020. In contrast, the proportion of internally generated revenues to the total receipts of states like Yobe, Jigawa and Bayelsa are less than 10%. Again, only five states, namely Rivers, Lagos, Anambra, Kaduna, and Ogun, can generate enough revenue to cover more than 50% of their operating expenditure. It is a no-brainer that unless in exceptional conditions where external financial receipts, such as the FAAC allocations are sizable, low levels of IGR that are insufficient to cover operating expenses will breed debts. Accordingly, state governments like Cross River at the end of 2020 had a total debt stock two and half times higher than its running annual revenue. All things being equal, the state has ideally exceeded a borrowing threshold and should restrain its borrowing frenzy and, instead, aggressively pursue an IGR expansion effort. But Cross-River State is not alone in this. The 2020 data shows that Plateau, Imo, Adamawa, and Bauchi states fall within this class.

Alas, the intervention capacity of fossil fuels to deliver the much-desired prosperity for the various tiers of government faces enormous threats. Of course, we have always known the elevated revenue risks in a mono-economy but chose to live as if they do not exist. But the perils appear more imminent and heightened with strident urgency to reduce that level of dependency. The global clamour for a shift from crude oil has become even more resonant. The early disruptions of the COVID-19 pandemic in 2020 demonstrated our vulnerability to oil revenue receipts as pillars of our fiscal programming. It showed how an unprecedented disruption to the crude oil market’s prospects would quickly buckle the country economically. While it is true that we have had some negative oil shock experiences, none seemed more precarious than the COVID disruptions. In one fell swoop, global oil prices dropped to rock-bottom in response to the high level of economic inactivity triggered by the pandemic.

Restrictions on movements and lockdowns across the globe put combustion engines that hitherto created a demand for our crude oil to a halt. As factories and general business machinery and ships, aircraft, trucks, trains, and other automotive devices halted their operations, global demand for the lubricating oil they use crashed. There was an immediate global supply glut with mounting warehousing costs and contract cancellations. Country suppliers were ready to pay buyers supposedly to clear off the stock they had in various warehousing reservoirs. The Federation promptly acknowledged the possibility of zero FAAC distributions for May 2020 as there were no receipts in the pool. Unfortunately, COVID-19 is just one out of many possible sources of similar disruptions that can mess up our fiscal composure and possibly create an economic crisis of unimaginable proportions.

There is absolutely no doubt that we are surviving on a dying resource. The odds are high against the long-term demand for crude oil. We may correctly argue that the demand for crude oil may not quickly die off in the next forty years. But what is incontrovertible is that global crude oil demand and attendant high prices will significantly drop by at least 50 percent in the next decade or less, and continue to fall afterwards on a running basis. We may also argue that in the absence of crude oil, we can live off other resources such as natural gas, which we have in abundance, gold and other mineral resources littering our underground space. Again, we are yet to invest substantially to exploit these additional resources as proper replacements for crude oil. There are at least two significant reasons we should quickly reconsider our continued oil dependency. The first is the revolutionary disruptions that electric engines and automotive will create. The second is the clean energy and sustainable development arguments that do not support our continued fossil fuels dependency.

For more than a century, the internal-combustion engine powered industries, revolutionized global production operations and attendant logistics. But it is gradually nearing its demise with massive disruptions from the electric revolution at the doorstep. The giant switch to electric vehicles by traditional automakers correctly sends the signals. For instance, Nissan, GM, Ford, Volvo, and the PSA group are switching 100 percent to electric cars by 2030. Toyota and Volkswagen group intends to have a minimum of 20 percent of their total vehicle production by 2030 as electric powered. Aside from switching to electric engines, the second crucial factor is a powerful global sentiment against the oil industry. There are increasingly higher than typical investment risks triggered by competing clean technologies and global climate protection targets. Part of global warming containment efforts is to drastically reduce CO2 emissions, which stands on the continued use of fossil fuels. A United Nations climate gathering in Glasgow has initiated arrangements for major banks in the world to restrict investment spending on fossil fuel companies. The United States is already leading the war against the use of fossil fuels. But overall, most non-oil-producing countries will naturally prefer investing in renewable energy to the continued importation of crude oil.

For the country, the only way out is implementing a well-designed diversification programme to span over the next two decades. But subnational governments who are comparatively worse off need these efforts more and should take the lead. Regardless, all tiers of government will benefit from the expanded economic activities, employment opportunities and fiscal prospects. Fortunately, the economic structure of most subnational governments gives ample headroom for structural and fiscal diversification. On average, economic activity in most state governments revolves around the primary sector. But structural transformation efforts cannot be haphazard. Otherwise, it may deliver less than desirable outcomes. The underlying strategy must correctly evaluate income prospects, employment generation opportunities, and the speed of sector growth vis-a-vis the capacity to meet sector transformation funding requirements. Those sectors that scale through the huddle thresholds set based on the enumerated criteria will receive priority attention in the primary sector transformation sequencing plan. Subnational government efforts will comprise both direct investments such as build and transfer (BT), build, lease, and transfer (BLT), public-private partnerships (PPP) and other properly targeted strategies for attracting private investments.

In addition to the structural economic diversification, state and local governments should also pay close attention to the various unexploited tax and nontax revenue sources. Setting clear targets and robust strategies for their exploitation spanning the short, medium, and long-term will be most fundamental for best results. In turn, state and local government leaders must implement an appropriate performance management system that would drive efforts towards realizing and possibly exceeding set targets for each period. Additionally, state and local governments should also periodically review the performance of currently exploited tax and non-tax revenue sources to determine their optimization levels and mitigate challenges affecting their performance where identified.

Finally, the ideal direction for state and local governments is to craft and judiciously implement medium and long-term strategies for revenue independence. The minimum strategic target should be to conveniently and sustainably generate enough revenue to cover their operating expenditures with some reasonable surplus. Central to this aspiration is a combination of a concrete plan for structural diversification embedded in a robustly thought-through and judiciously implemented development plan with measurable performance indicators and a monitoring programme to drive their successful accomplishments. The satisfying component is a short to medium-term programme for identifying currently unexploited tax and non-tax revenue sources and not-well-optimized subsisting tax and non-tax sources. A three-period rolling medium-term expenditure framework accommodating the financing requirements for actualizing these IGR expansion proposals will signal state governors’ sincerity to lead Nigerian subnational governments into a new era of financial freedom and socio-economic prosperity.