Stocks gained and Treasury yields jumped with traders taking an optimistic stance on the latest trade developments as a long-anticipated meeting between America and China got underway, and after contrasting reports on the talks spurred volatility. The pound jumped on talk of a Brexit deal. 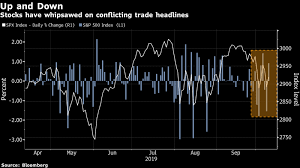 Banks and chipmakers led the S&P 500 Index higher, with an extra boost after President Donald Trump confirmed talks will continue Friday, after an overnight session that saw futures whipsawed by headlines giving conflicting signs of progress on the negotiations. The dollar fell, brushing off a weak inflation reading as all eyes remained on trade. Ten-year Treasury yields approached 1.65%.

Among the latest developments:

Markets have grown jittery against a backdrop of deteriorating economic data and fresh tensions between the U.S. and China in recent days, as they prepare for the first face-to-face talks between senior officials since July. Investor nerves were on full display Thursday as a series of headlines roiled markets, with traders attempting to digest reports on everything from the duration of the talks to the potential currency pact.

“China trade talks are really dominating everything and we’ve seen how unpredictable they can be,” Chris Gaffney, president of world markets at TIAA, said by phone. “We’ve seen it move just back and forth so dramatically. I think everyone’s really going to have to wait until a deal gets actually done.”

Elsewhere on Thursday, the Stoxx Europe 600 Index and the British pound extended gains after U.K. Prime Minister Boris Johnson and his Irish counterpart Leo Varadkar said they could “see a pathway to a possible deal” on Brexit.

Crude rose after OPEC Secretary-General Mohammad Barkindo said members and allies including Russia will do “whatever it takes” to prevent another oil slump as the global economy weakens.

Asian shares ended the session mixed, with Japanese equities recouping their declines by the close, South Korea down and Hong Kong and Shanghai notching modest gains.