Stocks ended higher Wednesday, building on their record-setting run after the release of stronger-than-forecast economic data. 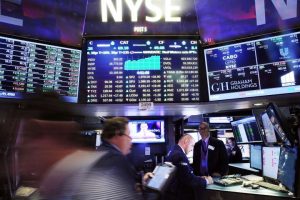 The Dow gained 42 points to close at 28,164. The S&P 500 climbed 0.4%, while the Nasdaq advanced nearly 0.7%. The averages posted intraday records and notched their fourth straight day of gains.

Apple and Facebook contributed to Wednesday’s gains, adding 1% and 1.7%, respectively. Amazon gained by 1.2% while Netflix rose 1.1%.

Consumer discretionary was the best-performing sector in the S&P 500 ahead of Black Friday, rising 0.8% as Under Armour shares outperformed. The apparel maker’s stock traded 6% higher after an analyst at Raymond James upgraded it to strong buy from outperform, noting the stock is underrated and an underdog.

Strong economic data supported the gains. Durable goods orders rose 0.6% in October while economists expected a decline of 0.8%. Weekly jobless claims, meanwhile, fell to 213,000 from 227,000. Third-quarter GDP was revised to show growth of 2.1%. That’s up from a previous reading of 1.9%.

Meanwhile, the Federal Reserve’s summary of economic conditions — better known as the Beige Book — showed the central bank saw the economy expanding modestly between October and mid-November. “Outlooks generally remained positive with some contacts expecting the current pace of growth to continue into next year,” the Beige Book said.

The major averages have been on fire over the past month as optimism around U.S.-China trade talks increases. The Dow and S&P 500 are both up more than 4% in that time, while the Nasdaq is up more than 5%.

On Tuesday, President Donald Trump said negotiators were close to reaching an initial trade deal. Trump’s upbeat comments on trade followed a phone call between officials from the U.S. and China. The negotiators agreed to keep working on remaining issues.

Those comments came after Trump said last month that a “phase one” trade deal was in the works.

“Everyone is playing under the assumption that a deal benefits everybody, so that remains the most likely outcome,” said Scott Ladner, the CIO at Horizon Investments.

Washington and Beijing have imposed tariffs on billions of dollars’ worth of one another’s goods since the start of 2018, battering financial markets and souring business and consumer sentiment.

Wednesday’s moves come ahead of the U.S. Thanksgiving holiday for which the market will be closed on Thursday. Typically, this time of the year is good for stocks. Data from the Stock Trader’s Almanac shows the Dow has only declined 16 times in the past 66 years the Wednesday before Thanksgiving and the Friday after combined.

“Stocks are set up for a strong finish to the year,” said Nick Colas, a co-founder of DataTrek Research, in a note. “Not only are cyclical groups working, but interest rates also remain low. Since tax loss selling should not be an issue this year (that’s what killed December 2018), there should be no impediment to stocks ending the year on a very high note indeed.”