Stocks ended lower Monday, the first trading day of December, as investors assessed disappointing manufacturing data along with the latest trade news after capping a month that featured blistering gains. 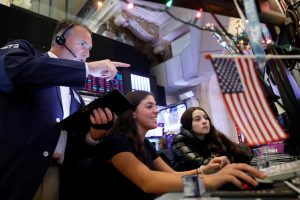 The Dow lost 268 points. The S&P 500 pulled back 0.85% in its biggest one-day loss since Oct. 8, while the Nasdaq closed 1.1% lower. The major averages started off the session with slight gains before turning lower.

Shares of Facebook, Amazon and Alphabet all dropped at least 1%. Netflix closed nearly 1.5% lower. Roku, which has been one of the hottest stocks of 2019, plummeted more than 15%.

Monday’s losses on the first trading day of December came after a strong performance last month. The major averages had their biggest monthly gains since June, rallying to record highs. The S&P 500 climbed 3.4% last month while the Dow advanced 3.7% and the Nasdaq rallied 4.5%.

Manufacturing activity in the U.S. continued to contract last month, the Institute for Supply Management said. The ISM Manufacturing PMI dipped to 48.1 in November. That’s below an estimate of 49.4. Stocks hit their session lows after the data was released.

“If you’re looking for a reason to sell, the ISM number certainly gave it to you,” said Art Hogan, a chief market strategist at National Securities. “The market seems like it wants to put in a short-term high here. That just means investors want to lock in some gains.”

He noted, however, that the dynamics that brought the market to record highs last month continue to be in place.

Sentiment was also dented after President Donald Trump said China still wants to make a deal on trade, “but we’ll see what happens.” There is no clear indication of when both countries will be able to sign an agreement, and last week saw fresh tension between Washington and Beijing after Trump signed legislation supporting protesters in Hong Kong. Trump said the bill signing “doesn’t make it better.”

That comment came after Chinese state media reported Sunday that Beijing wants a cancellation of tariffs for a phase one trade deal. Both sides need to reach a deal before Dec. 15. If not, additional U.S. tariffs on Chinese goods could take effect.

“There’s still this cloud over the market around what’s going to happen on Dec. 15 with trade,” said Christian Fromhertz, the CEO of The Tribeca Trade Group. “This is going to have to come to a decision at some point or another whether they’re going to roll back tariffs or delay those tariffs.”

Trump also said Monday he will restore tariffs on metal imports from Brazil and Argentina. In a tweet, he said: “Brazil and Argentina have been presiding over a massive devaluation of their currencies. which is not good for our farmers. Therefore, effective immediately, I will restore the Tariffs on all Steel & Aluminum that is shipped into the U.S. from those countries.”

Meanwhile, a report from The Global Times said China will retaliate with an “unreliable entity list.” This list aims at punishing businesses the Chinese government deems harmful to the country’s interests. The list, the report said, will be unveiled “soon.”