The Willie Obiano administration in Anambra State, with few months to its exit date in November this year, is pushing up a partnership deal with Air Peace, West Africa’s leading airliner, to format its incoming airport at Umuleri, by getting Embraer Corporation of Brazil, the world’s fourth largest civilian aircraft manufacturer, to locate a service centre for all of Africa in the state.

Details of the state government’s move have not yet been made public. Governor Obiano has since last year been in talks with the Air Peace founder, Allen Onyema, to lure the Brazilians into siting a service centre at the Anambra International Cargo Airport at Umuleri, which may be inaugurated later this year. 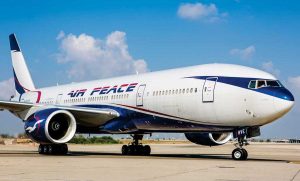 At the delivery last week of Air Peace E195 –E2 in Lagos, Onyema had appealed to the Brazilian Embassy in Abuja to advise the Embraer Corporation in Sao Paulo, to seriously consider building a service centre in Nigeria to cater for the African continent. The brand-new airplane, registered as 5N-BYF, is the first of 13 Embraer aircraft ordered by the airliner for its African regional routes.

According to C. Don Adinuba, the commissioner for information and public enlightenment, Governor Obiano had told a virtual discussion with some members of his administration working on the project that: “As the first carrier in Africa to purchase Embraer’s E series, which is the latest, Air Peace, with our support, is in a strong position to lobby the manufacturer to bring such a centre to our state.”

The Anambra international cargo airport, with 3.7 km runway and an 11-storey terminal building, pushing off as Nigeria’s second biggest airport, after the Lagos’ Murtala Mohammed, is designed to accommodate at least one hanger to service different kinds of aircraft, according to Ben Chiobi, a former Nigerian Air Force pilot, retired air force Air Vice Marshall and special adviser to Governor Obiano on creative security.

Chiobi, who also used to be a military attaché at the Nigerian Embassy in Paris, France, is among Obiano’s team working to realise the airport before his tenure’s expiration in November.

In August last year, when he visited the airport, an impressed Onyema said his Air Peace airline company would build a hanger there.

“If Air Peace builds a hanger here, and Embraer follows suit with an African service centre, the vision of building this modern and large airport on a very large swath of land will have been realized,” stated Governor Obiano, who described Onyema as currently the greatest promoter of private diplomacy in Nigeria.

Obiano said the Air Peace chairman, with the acquisition of the new airplane from Brazil, has shown that one needs not be in government or hold any public office to effectively promote the interests of one’s country; and has boosted Nigeria’s reputation in places like South Africa, the United Arab Emirates, where Air Peace flies into, with plans to start flying into the United States, India, Israel and the United Kingdom shortly.

He said his administration didn’t set out to build just any airport, but a strategic one that will help boost traditional commerce in the state and beyond; resulting in technology transfer and transformation of the state’s economic landscape.

Anambra, a state with bustling commerce, and travelling population, has a GDP of over N4.2 trillion.